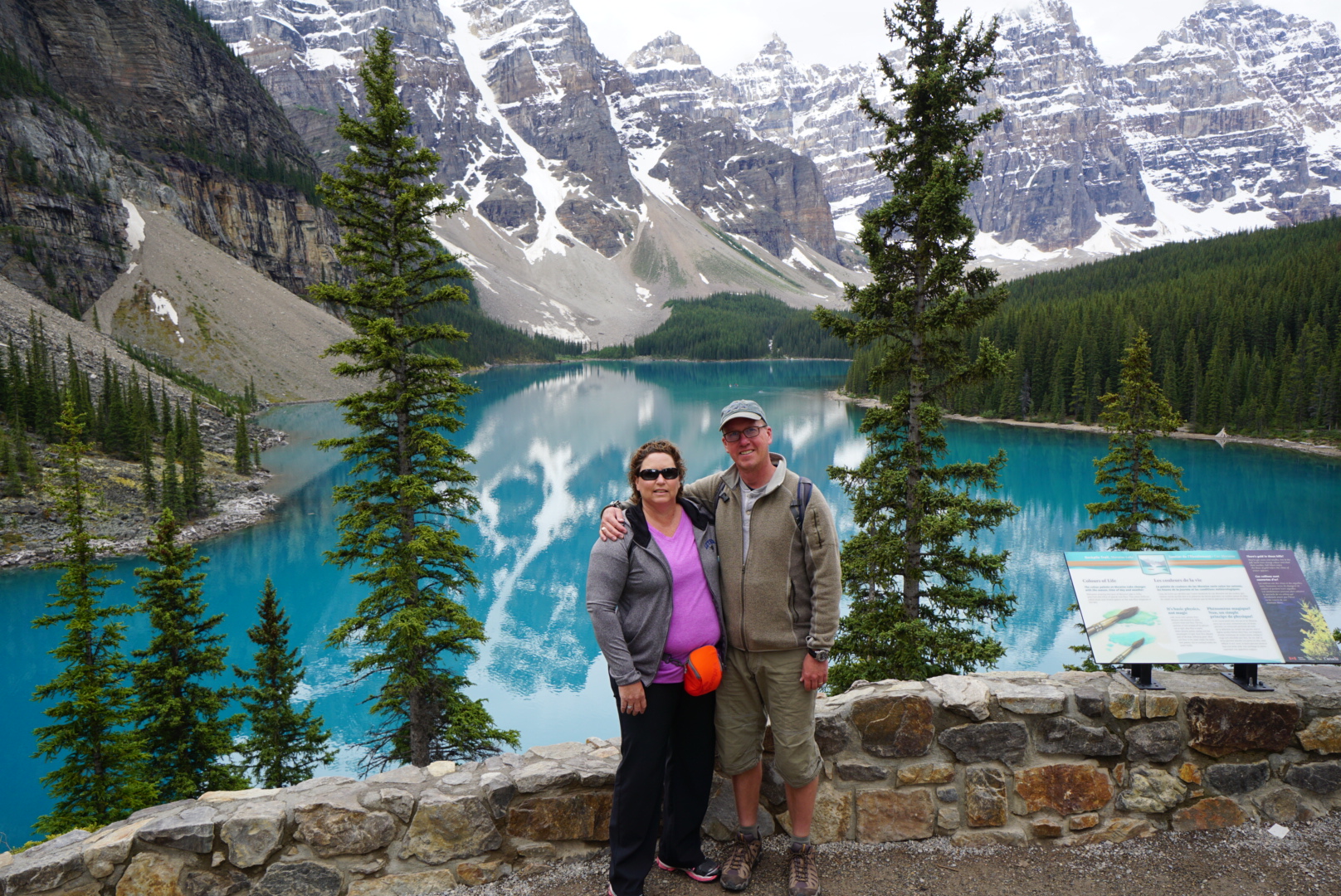 Happy Anniversary! Jane and I have been married 30 years today. People will say that is quite an accomplishment these days, I just can't believe that 30 years have gone by so quickly. We have two amazing children that have grown into wonderful young adults. Yes, one of them is older than we were when we got married. We have had 30 years of incredible adventures, we have seen a pretty good fraction of the world, and are looking forward to seeing lots more of it. I've had a pretty great career doing what I love. I couldn't have done any of it without Jane. Thanks honey!

We started today at Moraine Lake, its smaller than Lake Louise, and when you walk up to the waters edge you might think, meh, not as blue as Louise either. But if you climb up the rocks near the waters edge you don't have to go very far before you realize its just a matter of perspective. Of course climbing the rocks was part of the fun, but once we got to the top we realized there was a much easier way to get there! After absorbing the view for a while we made our way down (the easy way) and did a short walk along the lake shore. The sun started to come out, so we made our way back up and you can see how different the colors are in the sunlight! 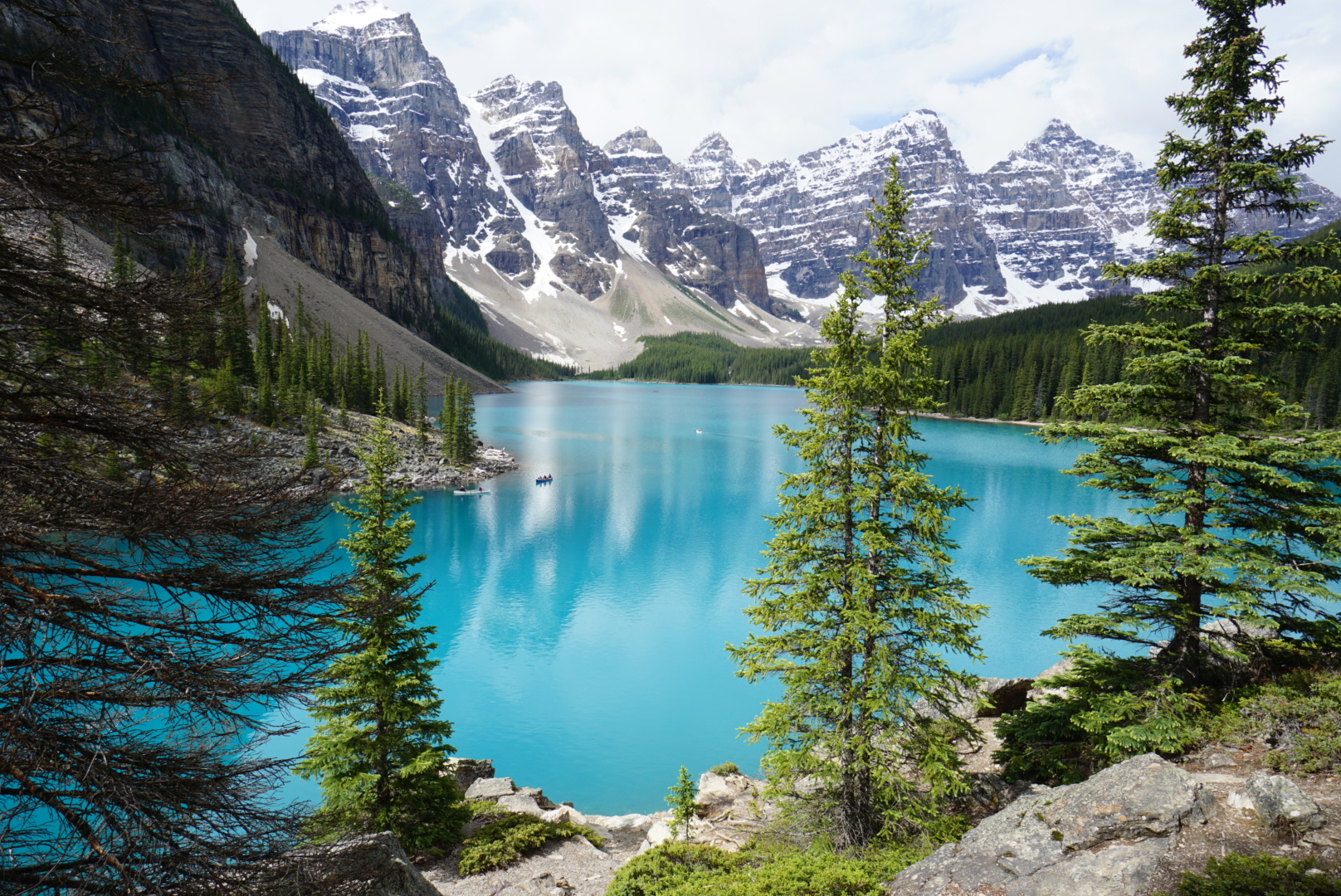 From Moraine Lake we headed down the Bow River Parkway towards Banff. Supposedly the wildlife is more plentiful along the parkway that the four lane freeway. There are so many places you could stop and hike or stop and view the scenery that we really had to pick and choose. Our main stop on the way down was at Johnston Canyon. We hiked our way up to the lower falls and were rewarded with some really great views. I'm always amazed at the power of these streams and waterfalls. You can really appreciate the power of water over the centuries as you see how this deep narrow canyon was formed by the water. 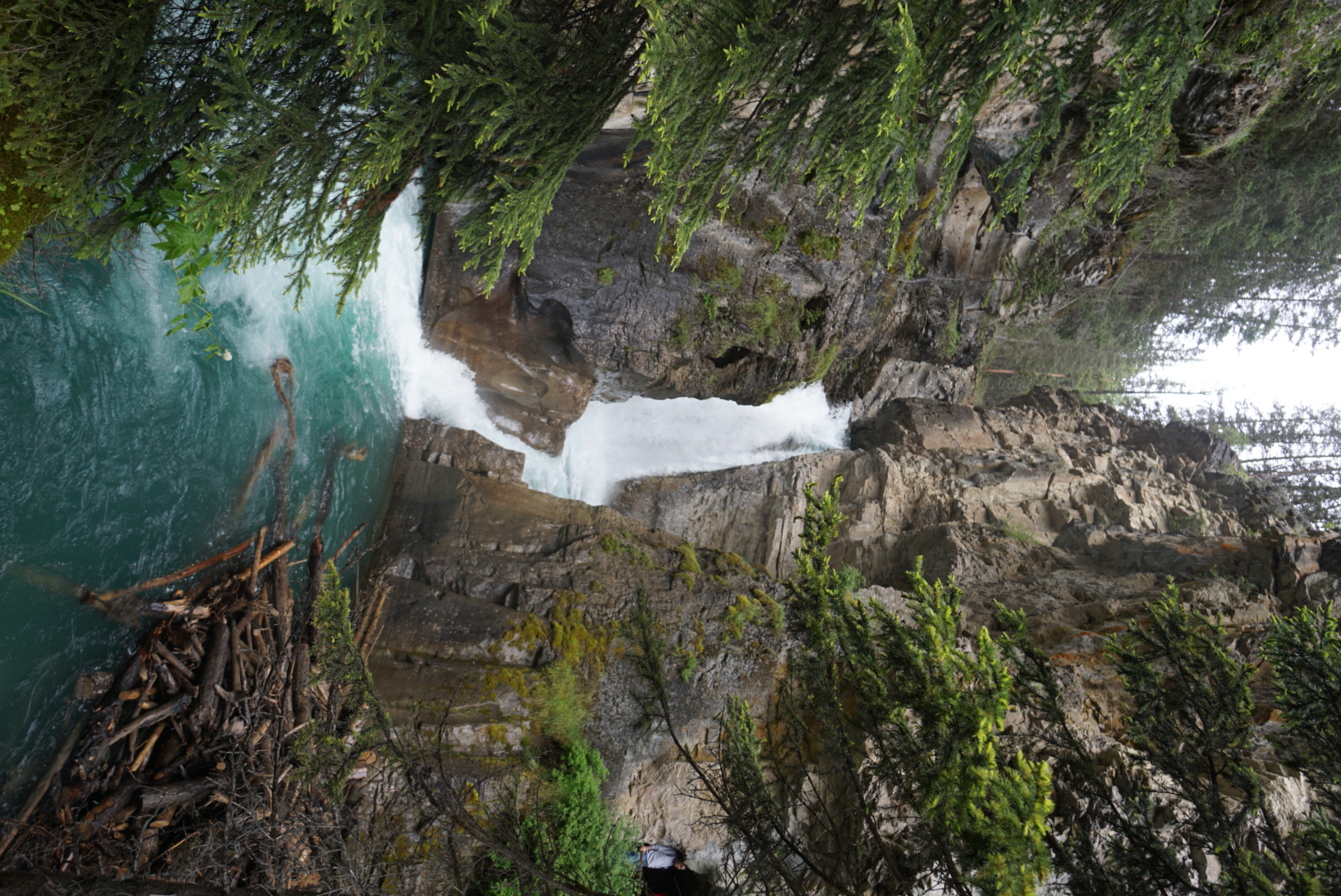 By now it was lunch time and we headed for downtown Banff. Our first goal was for lunch, with a strong subgoal of finding a place where we could watch the USA versus Argentina soccer match later. We found ourselves at Park Distillery. They had the Euro on TV, but unfortunately they did not get FS1. Apparently with Canada not part of the Copa FS1 is not a priority in Banff, as this became a real theme as we went from place to place. First everyone assured us they got soccer, but when I clarified that we wanted the Copa America tournament, not the Euro things went downhill. After receiving multiple assurances that the Bear Street tavern did indeed get the Copa, we decided we were safe and could be about our business.

Our next stop of the day was the Banff Hot Springs. I will admit this seemed a bit cheesy to me, but after a few days of hiking who can resist a nice hot soak. You can rent everything you need at the Banff Hot Springs, including historical bathing suits. Holly should have done this as she forgot a critical part of her top back in the RV. Leaving her with a slightly thin top. Despite my reservations, and the fact the Hot Springs really were nothing more than a a big swimming pool full of hot mineral water the soak felt great, and we all got an extra shower! The quote of the day, was in the car on the way to the Banff Hotel when Holly was having further wardrobe problems and was heard to say "I can't find them!"

After a short tour of the Banff Hotel, we headed back downtown for some shopping and wandering around town. Basically wasting time until the game started. At 6:30 we headed over to the Bear Street Tavern to take up our seats and wait for the game to start, only to be told that it would be an hour and a half wait for a table with no guarantee of seeing a TV. Horrors! Fine then, off we go to the Pump and Tap tavern. Described by the hostess of the Park Distillery as "a dive bar". But being that it was an English pub they did get the game. In fact the owner had purchased a package just this week to ensure that they would get the Copa. No credit cards accepted, no table service, but lots of TVs and some decent beer. They had a very short menu with a number of deep fried options. 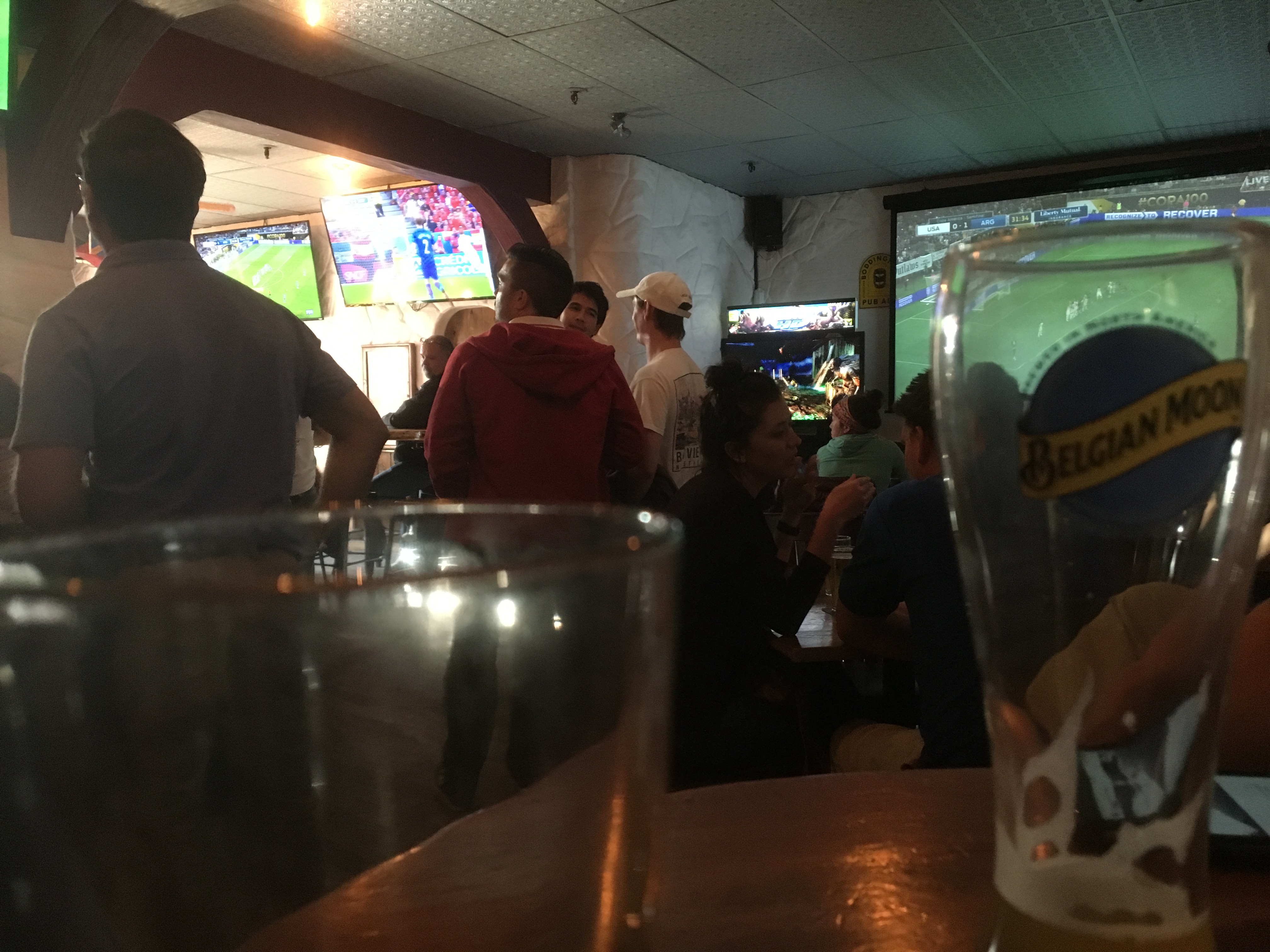 Just before halftime we got a text from Bear Street that our table was available. Brian went to investigate. Site lines to the TV? Copa available? As it turned out there was a view of the TV, but they did not have the package that allowed them to see the Copa. We were at the only place in town that carried the game. As time wore on, more and more USA fans filed in to watch the game. Then Messi kicked that wondrous free kick to put Argentina up 2 - 0 and all we could do was be impressed at how good the guy is. Right after halftime Argentina went up 3 - 0 and our stomachs said we should find some good food, so we made our table available to more diehard USA fans and headed down the street to the Coyote Cafe.

We didn't arrive back at the RV until after 9:30 which meant that it was a 12 hour day of touring and enjoying the sites around Banff. 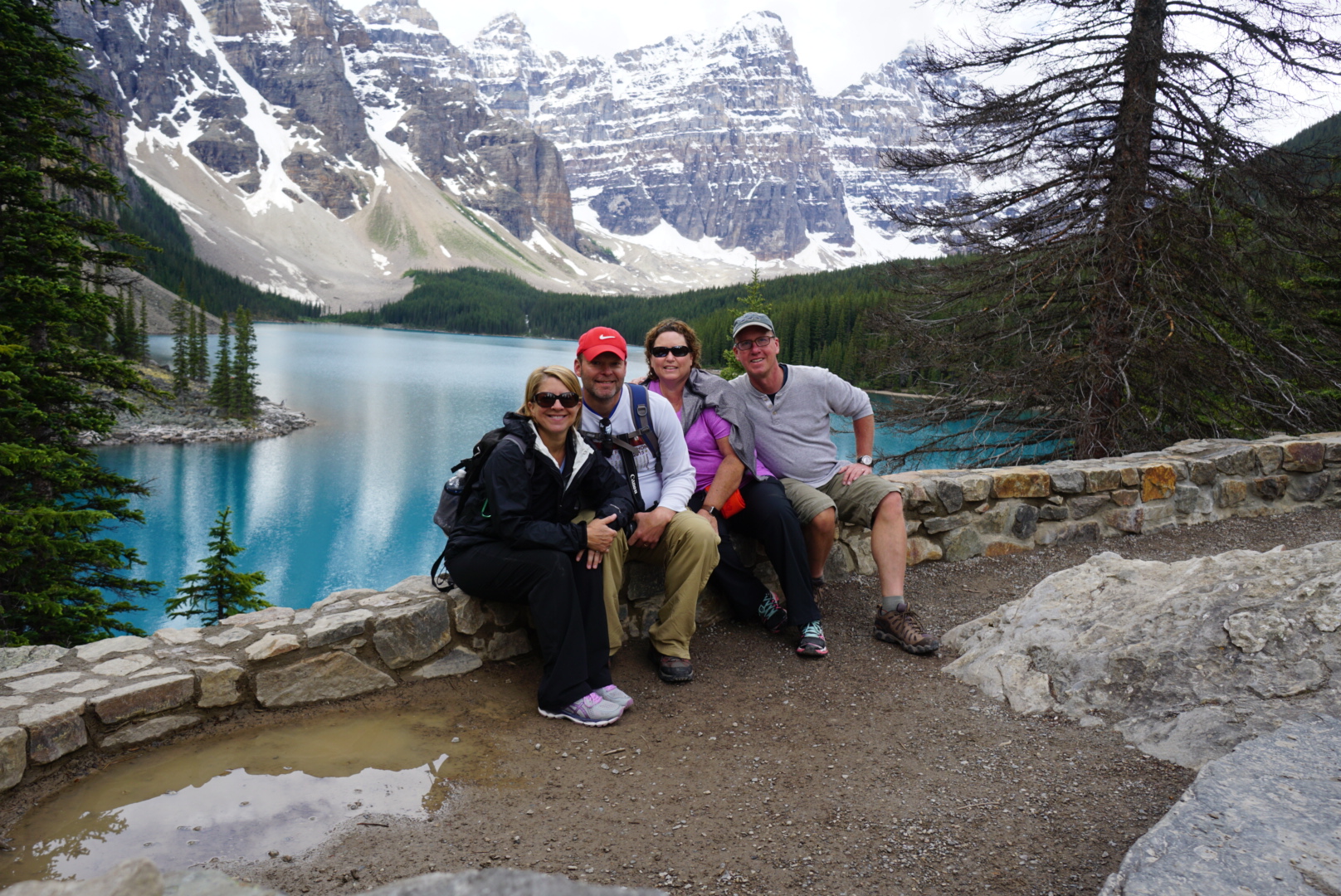