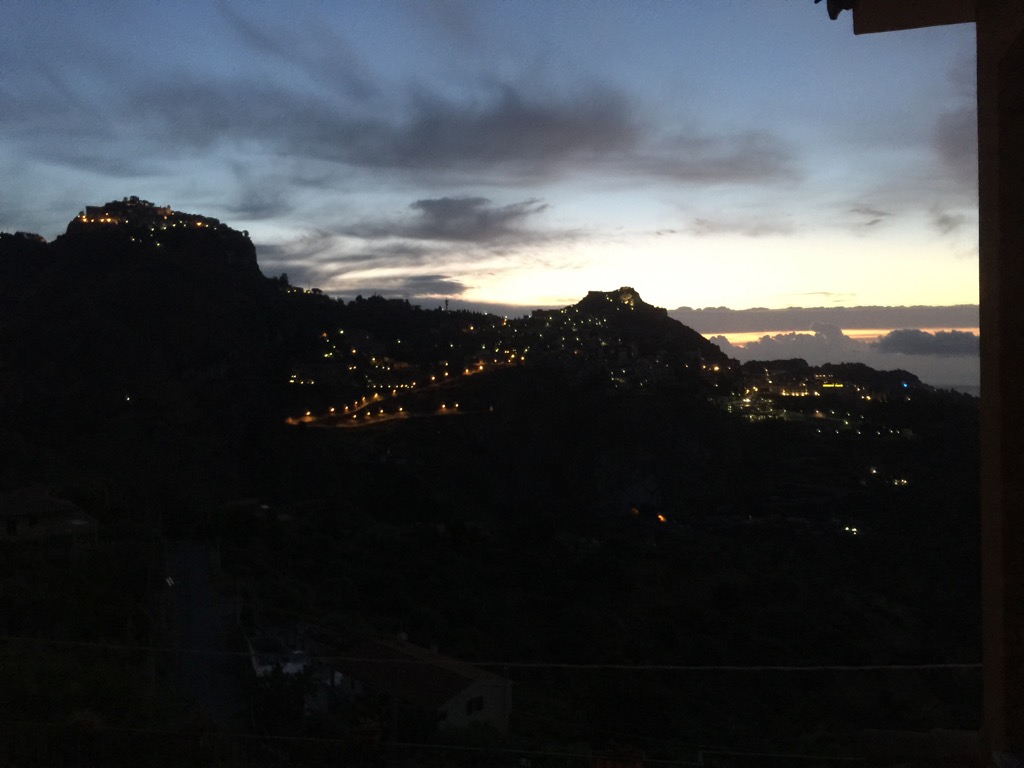 Since the students were planning on sleeping in this morning, Jane and I decided to explore on our own a bit. High above Taormina sits the little town of Castelmola. You can't drive there, you have to climb. And so we did. But when we arrived in the little town we were rewarded with a spectacular view up and down the Ionian coast. 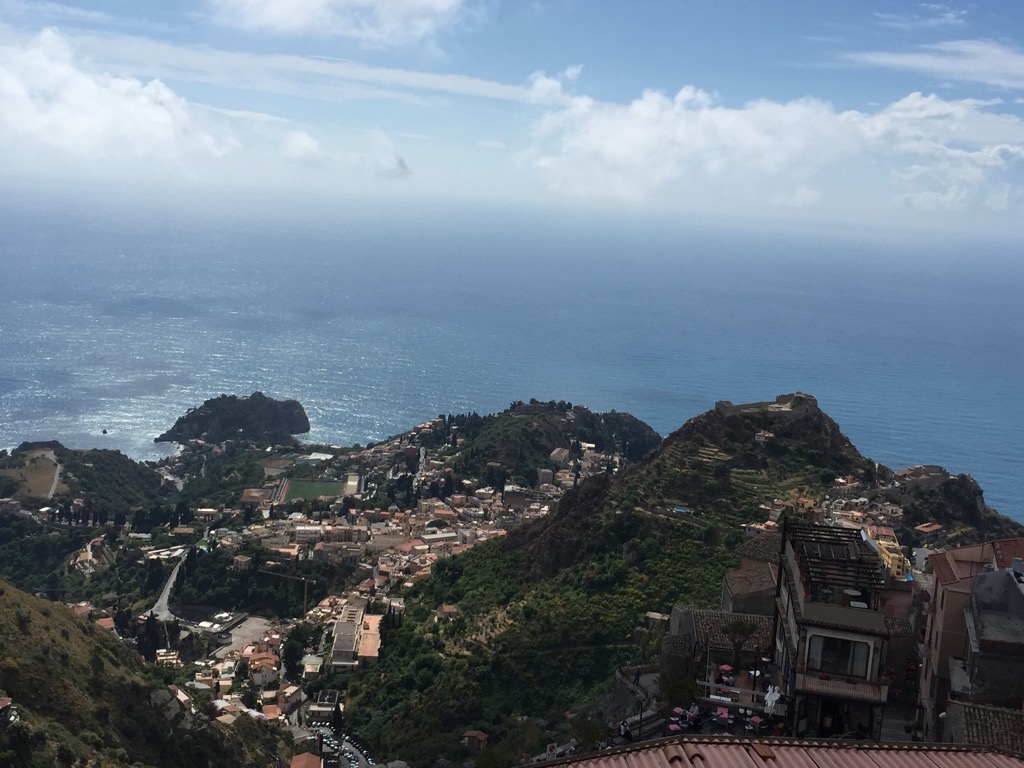 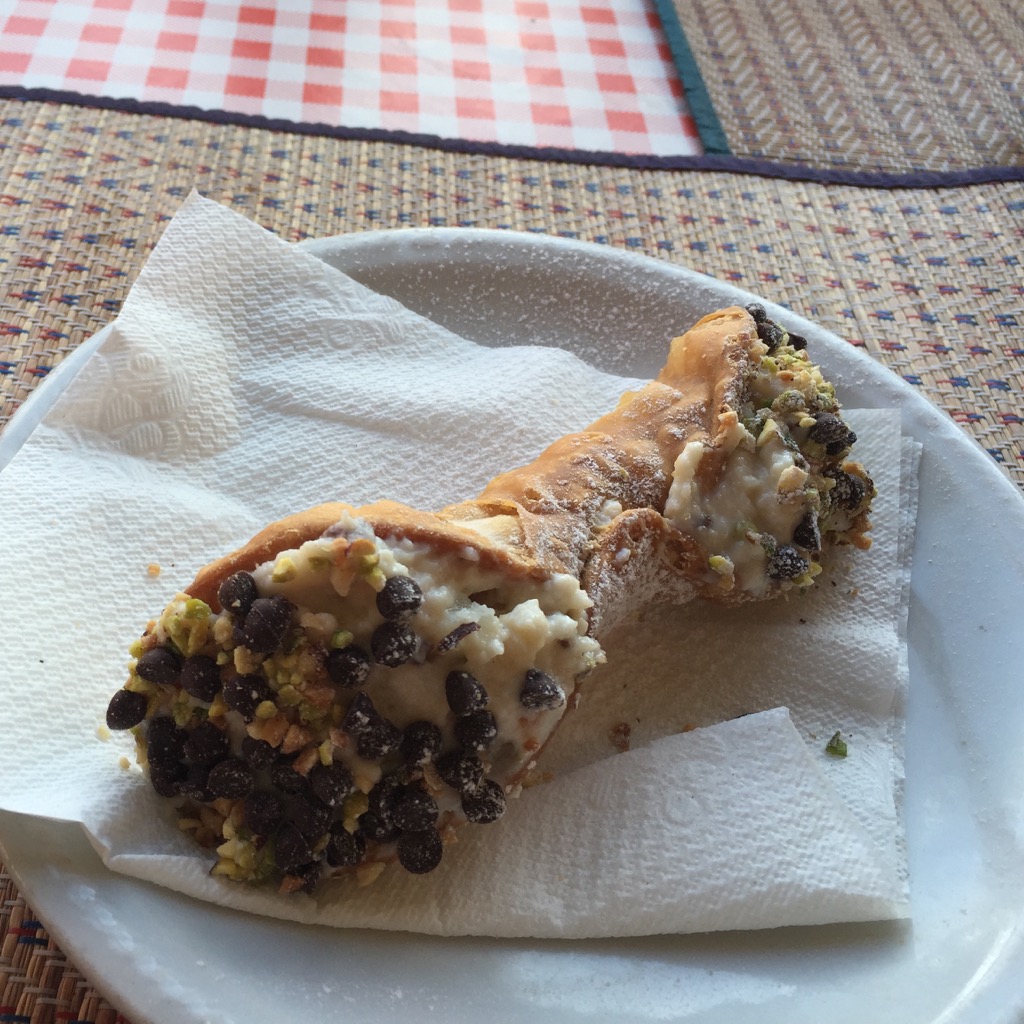 After enjoying the view we decided that a Cannoli and Cafe were in order before we started the hike down. At the end of one small street we found the perfect place. Maria, the proprietor of Gallo Cedro was cutting tomatoes on the terrace. "Prego," she said by way of invitation to come in and sit down. The Cannoli's were first rate. She stuffed them fresh for us and added some chocolate chips and pistachios to top off each end. Perfecto. We were about half done with the Cannolis when she unexpectedly appeared with two shot glasses and a bottle of almond wine. Well it was only 10AM, but we figured when in Sicily... So we had a little digestif to help the cannolis go down.

We returned to the Lemon Tree (the name of our apartments) around 11 and everyone was out of bed and getting themselves awake for the day. We had some discussion about what we might do this afternoon. The gorge, known as Gole Alcantara, sounded like an interesting short hike and there was enthusiasm among the group for a stop at a Sicilian winery.

We made our way to Gole Alcantara and after making a donation to the parking attendant we set out on our short walk down to the gorge. It was beautiful. Of course many of our "kids" wanted nothing more than to play in the water which was quite a problem since we had not brought beach towels or anything for them to dry off with.

As we enjoyed the area, we checked our email to see if we would be able to visit any of the wineries. Unfortunately none of them could accommodate us that afternoon. So... We decided that we could do our own wine tasting back at the Lemon Tree.

The wine tasting preparation required another stop at the supermarket where we put a strict limit on the price of wine to be purchased for the tasting. Our goal was to keep it under 100 euros while recognizing that with 13 people each of us would just get a taste of each different bottle. It was quite the production to get six of us to agree on what wine to select. I will say that the Italian construction workers who were supposed to be building another set of shelves in the middle of the aisle we fairly amused/distracted by the blonde haired blue eyed wine aficionados. 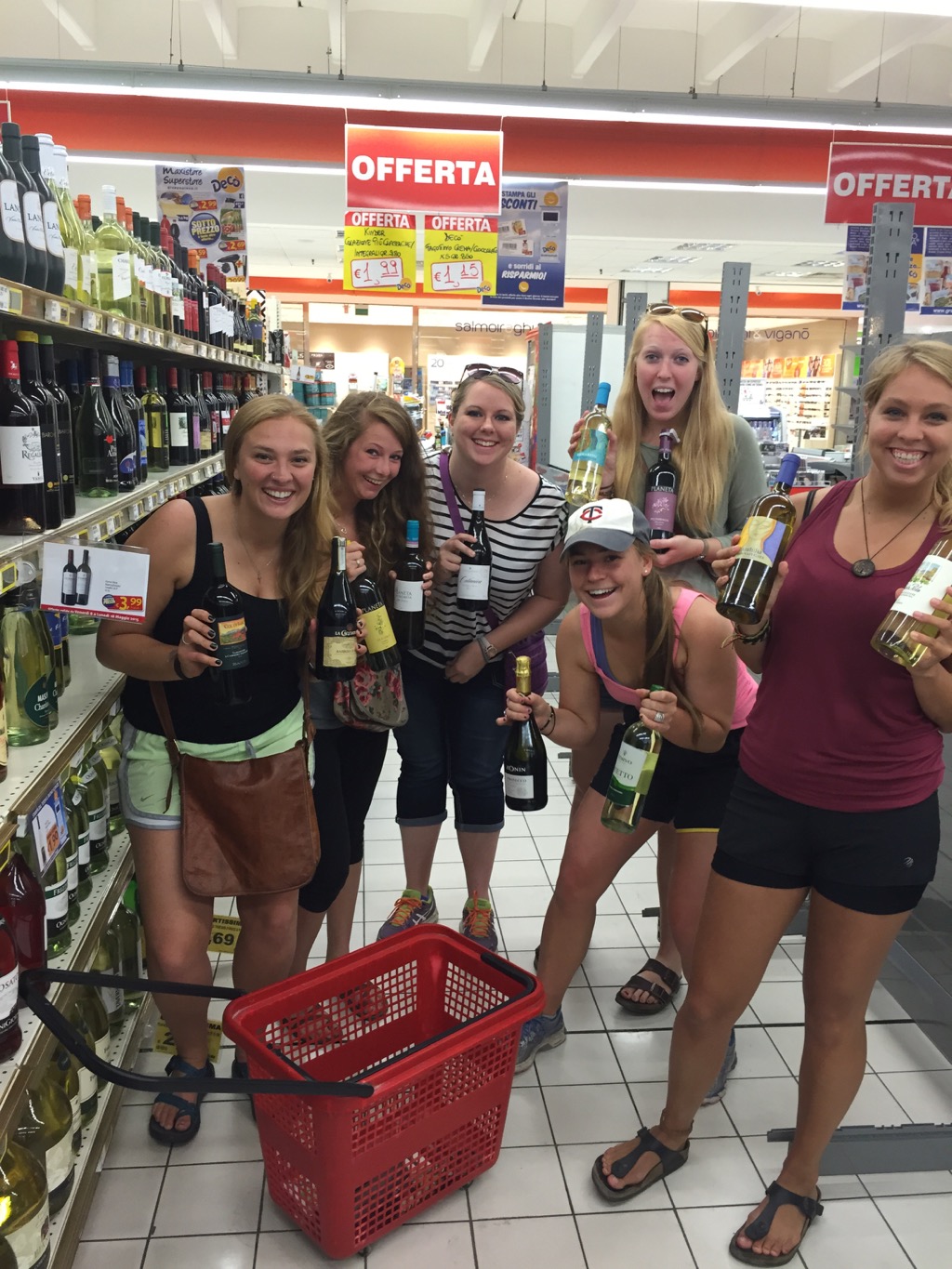 While we were in the wine aisle another group was in charge of meat and cheese and fruit. As you can see we put out a pretty good spread. We also agreed that we were "in for the night" as there was no way we were going to drive our mini-vans down or up the winding hill to the Lemon Tree after wine tasting activities. 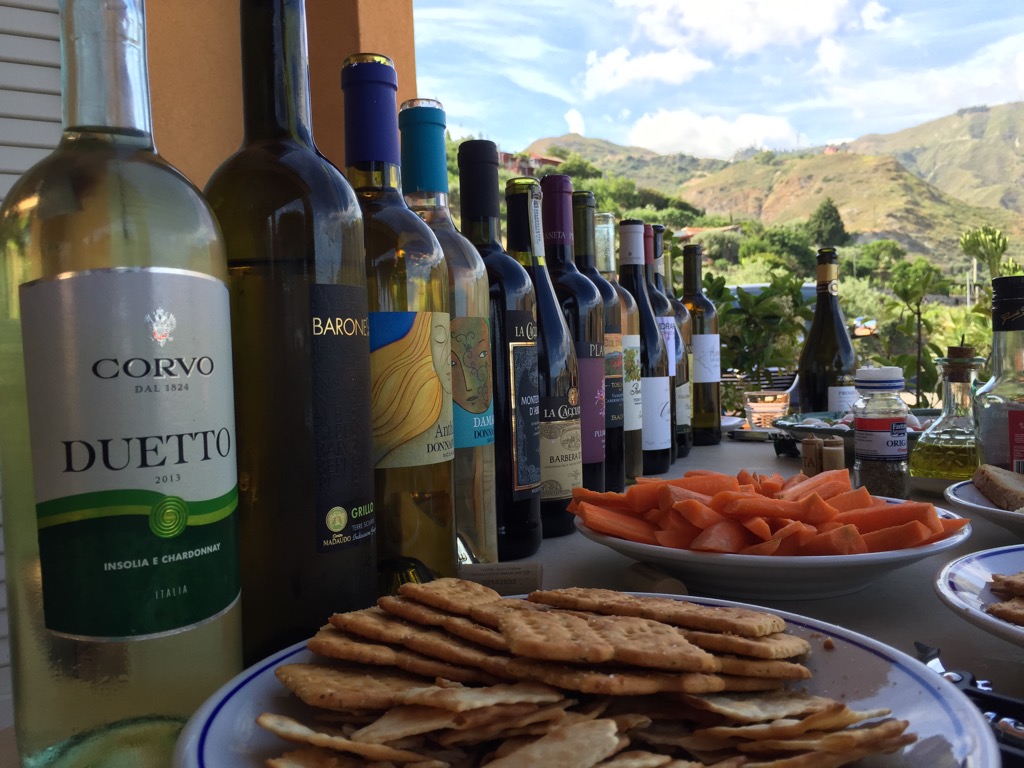 The wine and cheese went remarkably quickly. Even with a seventh inning swimming stretch between the reds and the whites. I guess it was inevitable that after a bit of wine, some of the people were going to end up in the pool fully clothed.

With the reds, gone, people were in the mood for movies or whatever, and then "the munchies" set in. We had been told that there was at least one Pizzeria that would deliver all the way up the hill, and that Paula would take care of calling and ordering for us. After much trying however it was determined that the pizza places were closed on Monday night. The horror and sorrow of a hungry group of students without pizza. We were totally resigned to a pizza free night when Paula knocked on our door to inform me that the pizzas had arrived! We were saved. And for some reason she was convinced that the students needed a nightcap, and so brought them a complementary bottle of home made limoncello!