This is weird, but I woke up this morning wondering about the question:  "what are the ships procedures in case of a Tsunami?"  Would we head for the open sea and ride out the giant fast moving swell there, or would we seek safe haven in a harbor of some kind.  Then, when Jane checked her email and the news she told me about the 8.9 magnitude earthquake in Japan, and the Tsunami warning issued for the entire Pacific Ocean.  I didn't really give it much thought, because after all we are a LONG way away from Japan.  However, when we were in the tour bus this morning, our guide told us that they were evacuating Easter Island and some of the other Chilean Islands.  OK, maybe this is more serious than we thought.  Now I was thinking what kind of damage could be done to the harbor in Valparaiso?  Will the tsunami have an impact on our trip home?  When we returned from touring we noticed that they were essentially evacuating the harbor, all of the ships we already towed out or in the process of being moved out of the harbor to more open water.  Score one for the open water solution.

As far as we know, this is not going to have a big impact on our trip. Out at sea, the tsunami is nothing but a big swell that we would ride up and over like any other large swell.  Its only when it gets toward land that it becomes the giant wall of water you see on the news. The captain is going about business as usual and we are on our way out of the harbor at Puerto Montt as I write this.  We have about 650 nautical miles from here to Valparaiso, and tomorrow we will spend a relaxing last day at sea.  If we were the tsunami, we would be able to get there in just a little over an hour!  According to news reports the wave traveled from japan toward Hawaii and the west coast of the US at over 500 mph.  The pictures of Japan on the news are just unbelievable, but again it appears that distance will sufficiently weaken the tsunami to the point where we will not be affected at all.

So, lets turn our attention to our fabulous day here in Puerto Montt!  We got to check off a bucket list item today.  What could that be you ask?   Zip Lining!  The highlight of todays tour was going to the top of a volcano, and then riding a series of zip lines to the bottom.  When we arrived on the pier this morning it was quite overcast and the owner of the tour company warned us that with the rain from last night and the wind today we might be out of luck.  But we took off in our little bus and headed for Lago Llanguihue, this is a huge vacation lake that sits below the volcanoes.  And when we arrived at the base of the ski lift on the volcano it appeared that we might in fact be out of luck.  Here's a view of what the side of the volcano/ski area looked like: 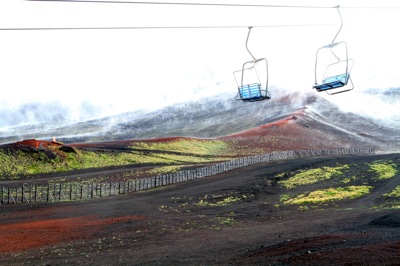 We were clearly in and above the cloud line, and it was really eerie to see the wisps of clouds, that looked like steam rising from the dark sides of the volcano.  Our guide told us that we would not be allowed to go because of the wind.  So, we just hung out for a while looking at the clouds and suddenly we noticed that the sky towards the top was starting to clear.  Suddenly the chair lift even started running.  Our guide came out and said OK team lets head down and we'll go into Puerto Vargassafsf for some shopping and a nice lunch.  Wait!  a couple of the women (including jane) said.  Can't we at least ride up the chair lift?  Of course I'm thinking you guys are mad, why would we want to ride higher up into the clouds to just see more clouds.  So our guide told us to wait and she would check.  Miraculously, now the 'experts' were out checking the zip lines to see if they were safe.  The verdict came back that it was safe, so a few of us decided to follow the original plan and go for it.

When we reached the top of the ski lift we were treated to the following view: 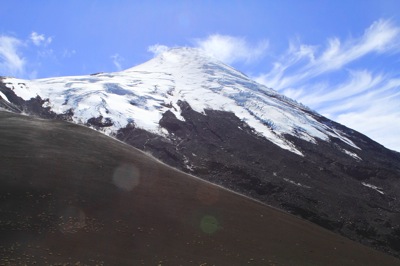 Clearly you can see the clouds had dissipated and we had a fantastic view of the top of the volcano, and its glacier.  It took us a few minutes, as the guy working at the top of the lift did not speak any english, but we eventually located our zip lining guides.  They got us into our harnesses and led us to the top of the launching pad for our very brief (10 seconds?) safety briefing.

Him:  No touch the cable, only here and the break

And off you go!

Here's Jane and our friend Scott before we got our helmets.  Those harnesses are certainly stylish. 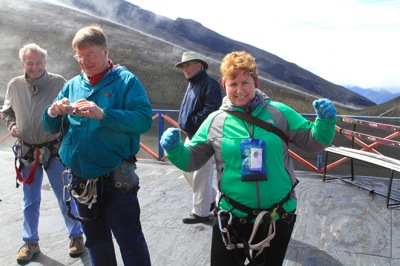 And now here's Jane on her first run of the day.  Yes kids thats your mother hanging by a thread from a long thin piece of cable..  Don't worry she's having the time of her life. 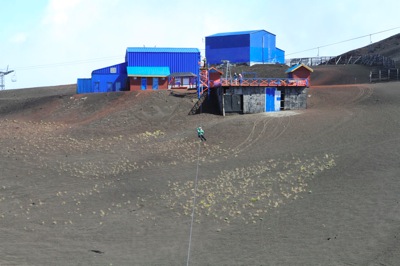 And now here's one of me coming in for a landing after our longest ride.  The span of this ride was 600 meters!  The total ride time was about 38 seconds which means our average speed was 15.78 meters/second or about 35 mph. 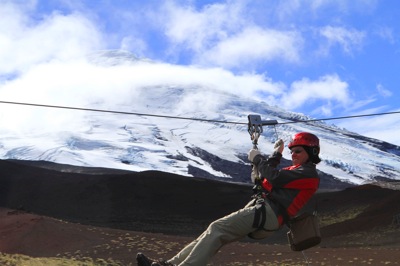 In all, we got to go on four different runs, each was great and very exhilarating.  We had an adrenaline rush for a good hour after we were all done, talking excitedly in the bus all the way back down the volcano.  A great day and a lot of fun.  Can't wait to try it again sometime!