I'm writing this from 35,000 feet, in the exit row of a Ryanair 737-800.  Its almost noon and we are on our way to London!  We started this morning early with a bus ride to the airport.  We had been expecting a very easy, small airport experience.  We had been told that the Torino airport is quite nice and easy to get around.  However when we entered the terminal at 9:00 for our 10:25 flight the first thing we noticed was that the security line looked like it might take until 3:00 this afternoon to get through.  This set of a general sort of fear among the entire group.

We had been warned well in advance about all the extra fees that Ryanair charges, so everyone was very careful to make sure their bags were under the 20 kg limit.  The ticketing agent was very friendly and even let a couple of the bags that were slightly over the limit slide through.  After checking bags it was all the way to the back of the line, which stretched all the way across the terminal.  Luckily the line moved along much more quickly that we were used to so we got through security in about 45 minutes.  After security we had to go through passport control. and then get in line.  There are no assigned seats on Ryanair so this is where things get downright pushy.  Everyone was trying to crowd the front of the line.  When they finally announced that our flight was going to be delayed due to the heavy fog.  The delay did not deter anyone from camping out at the front of the line, which is really funny because when we finally got through the boarding line we did not get on the plane!  Instead we had to walk down a bunch of stairs and board a bus, where we waited for another 20 minutes!  Finally the busses closed their doors and were ready to take off.  We almost had a mutiny on our bus when it appeared as though the second bus, with those slackers who were at the back of the line was going to leave for the plane before all of us who had been near the front!  Horrors!

When the busses arrived at the plane, ours stopped near the front door, but the other bus went around to the back.  It looked like those sluggards were going to catch a break after all.  Luckily for me craig was lucky enough to be right be the door at the back.  He headed straight on and to the middle of the plane to reserve an exit row so that Aaron could stretch out his legs.  As it turned out Aaron could not sit in the exit row because of his crutches, so here I am. 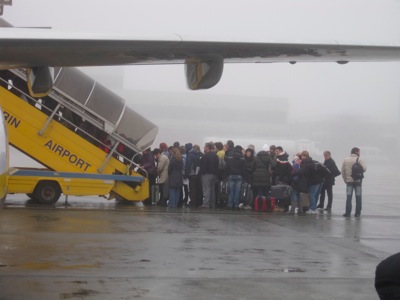 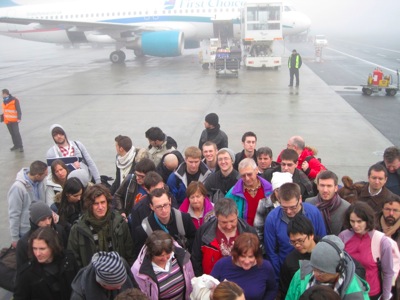 We took off in heavy fog, but it only took a few seconds to get above it all where we were treated to beautiful views of the mountains surrounding Torino.  The captain says the weather in London is clear and sunny so we are all excited to get to see the sun, and to spend some time in an English speaking country!