I woke up around 3:30AM when I heard a few splatters of rain against the roof of our Casita. The alarm was set to go off at 5AM, groaning internally I rolled over and listened to the rain turn from splatters to a steady stream. Our goal for the day was to do the 7.5 mile Inca Trail hike to the Sun Gate of Machu Picchu. I really was not looking forward to doing that in the rain!

After much tossing and turning 5:00 finally came and we headed up for an early breakfast. We were meeting our guide and driver at 6:00 to head to the train for the trip to our drop off point. At breakfast we met Bob and Bonni who were taking the same train, but going all the way to Agua Caliente and visiting Machu Picchu from there.

When we arrived at the lobby to meet our guide, Bonni was on the phone with their guide. It seems that there was a big accident on the way from Cusco and that their driver was going to be at last 30 minutes late, which would cause them to miss the train. We volunteered to ask our guide to see if they could ride with us rather than riding in the taxi and everything worked out great.

About halfway to the drop off point the rain stopped! By the time we were ready to hit the trail we could actually see a few patches of blue sky peeking through the clouds. This was looking like a good day for hiking after all! 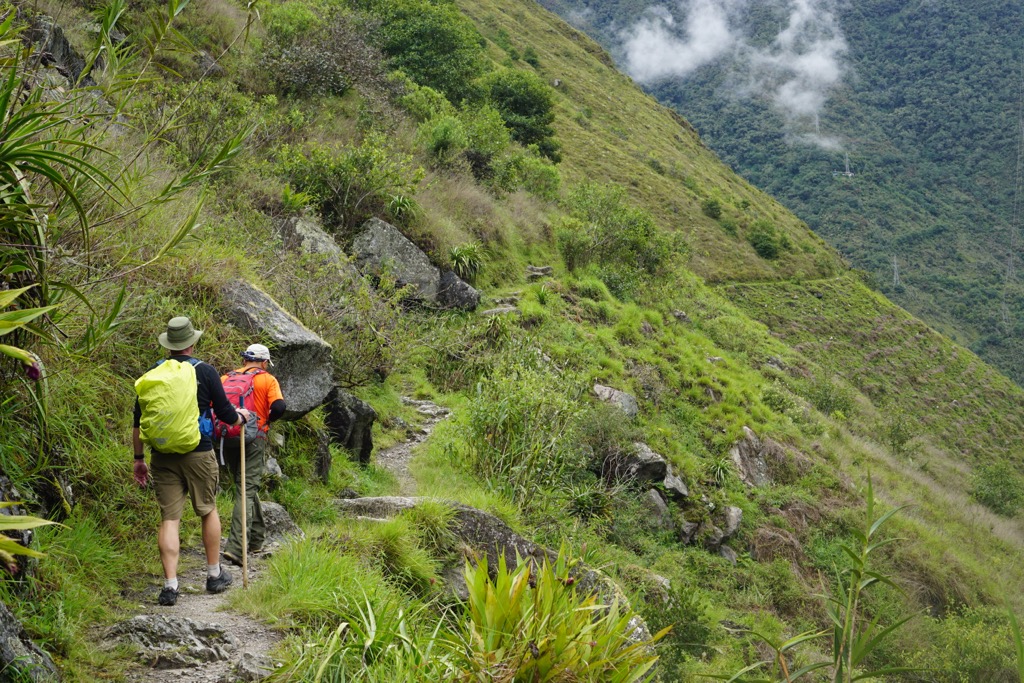 The one day hike has three main parts. The first half is up hill where we gained over 1500 feet of elevation. The next section is billed as being pretty flat, but that’s a lie. It’s flat until the end where you have to climb up to the Sun gate. From the Sun gate its all downhill, but that is maybe the last 1/8 of the 7.5 mile hike.

We took it at a good pace and enjoyed most of the climb. The scenery got better and better as we climbed higher. We were mostly alone on the trail. There was another pair of hikers that started just a bit before we did, and every so often we could catch sight of a larger group of 9 ahead of us on the trail.

Soon we were high enough to look down on the trains as they passed with passengers heading to Agua Caliente. 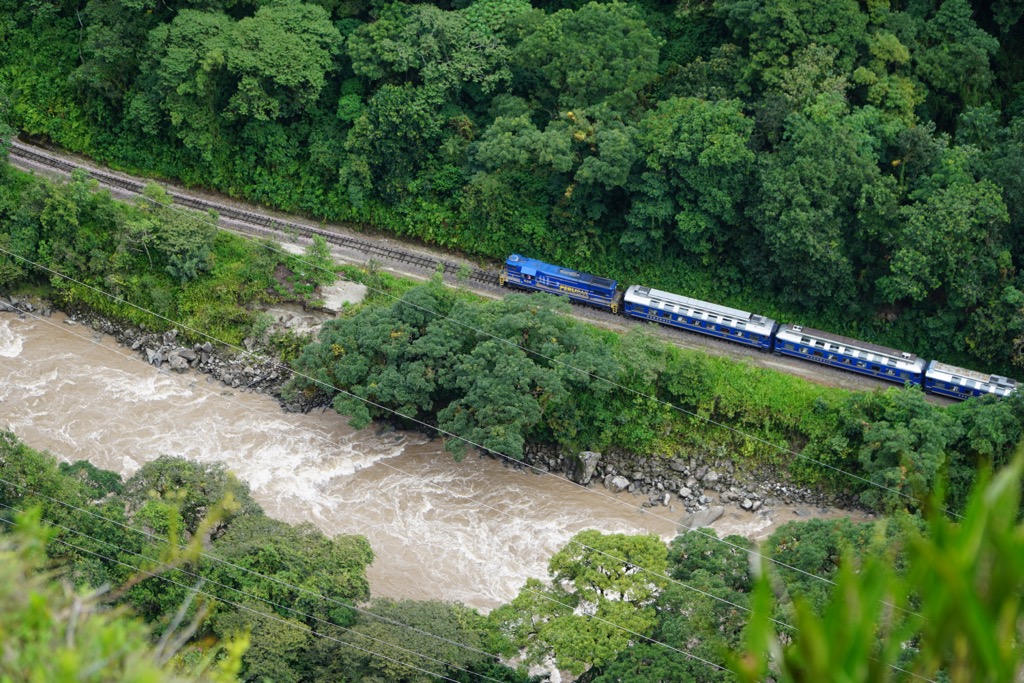 One of the sites we got to see along our hike was the amazing Wiñay Wayra terraces. It was beautiful to see from the distance. 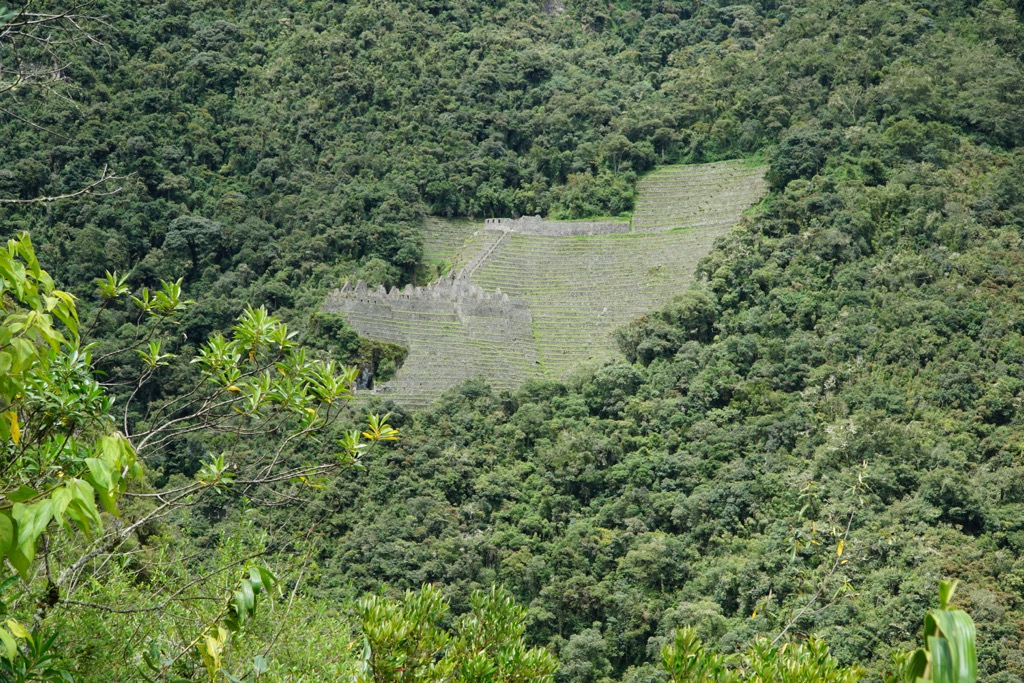 We thought it looked close, but somehow we kept walking and it never seemed to get any closer. Finally we came down a few stairs then up a few stairs and stopped for a rest at the base of a waterfall. This was our time to gather our energy for the climb through Wiñay Wayra. When we arrived the group of nine was just leaving, so we felt like we were doing a good job of keeping the pace. 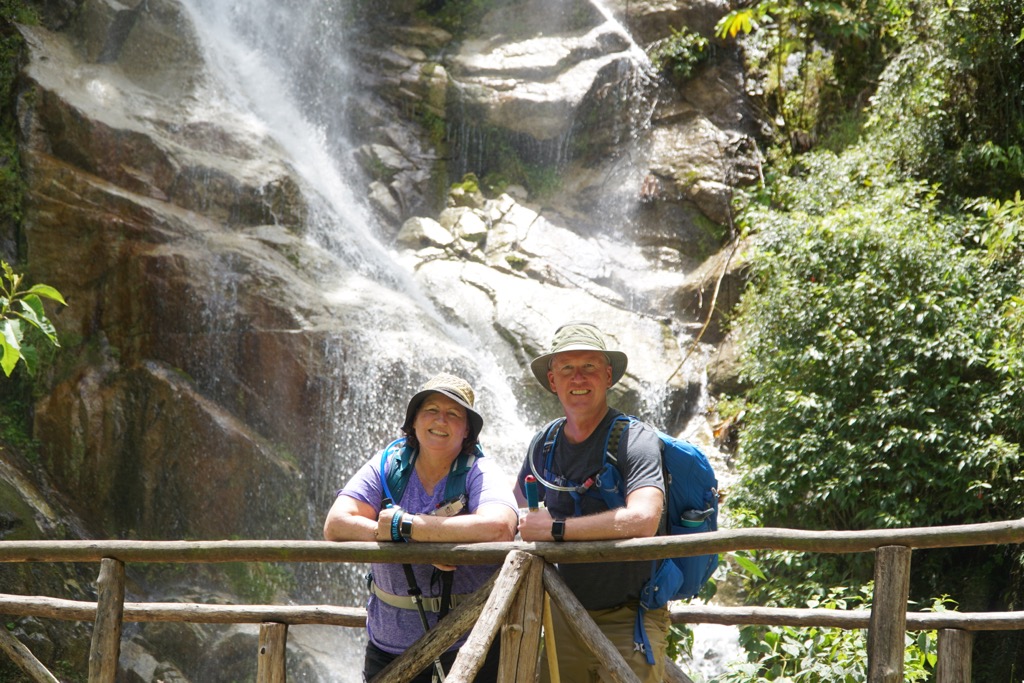 It looks a lot more daunting in person than it does in this photo. And when we finally got to the base I started counting stairs. We were able to do about 60 at a time then we would have to stop and rest and catch our breath. 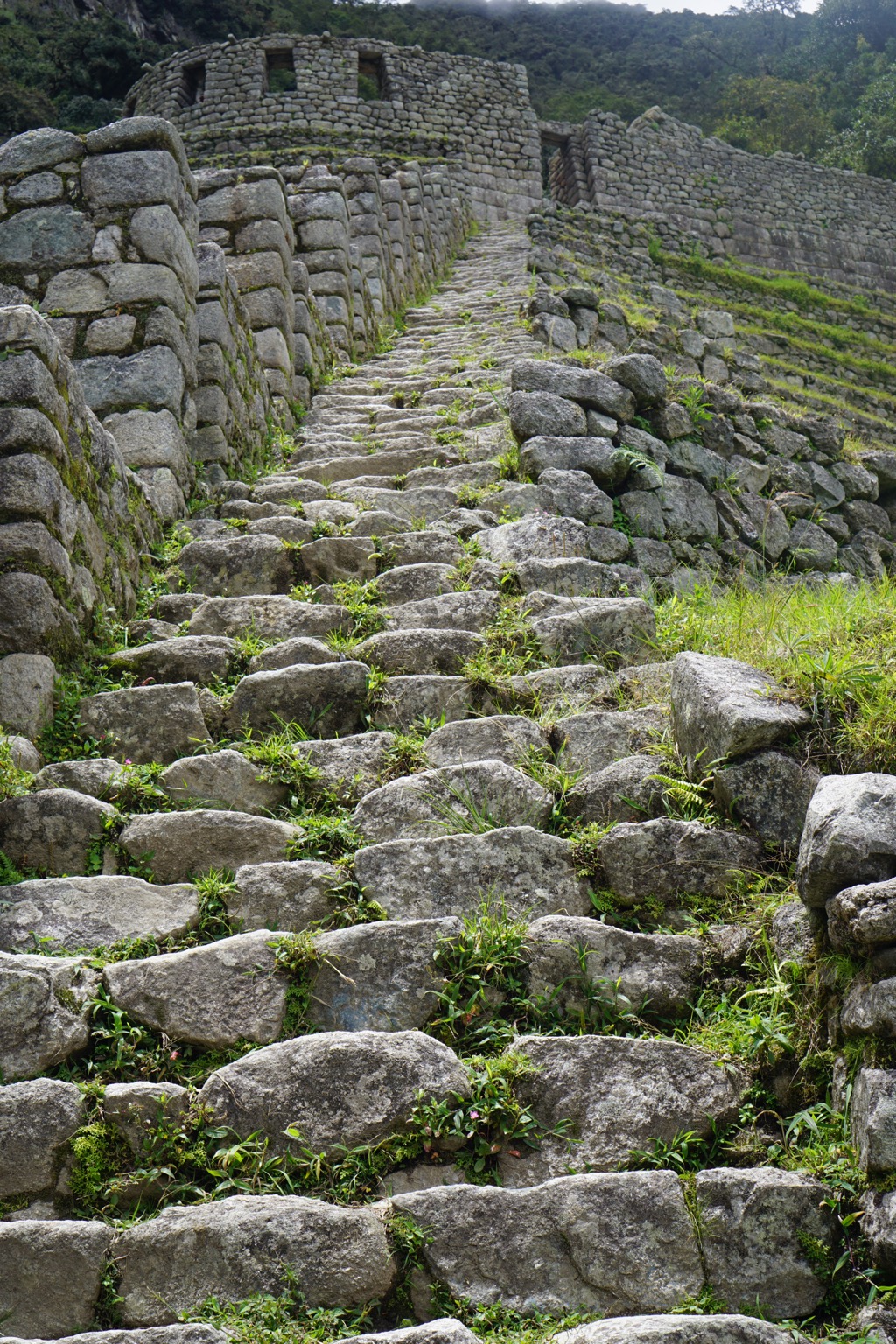 The altitude definitely makes it harder work! After 375 stairs we finally arrived at the terrace about 2/3 of the way up where we were able to go across and exit. This was an amazing place for a picture. 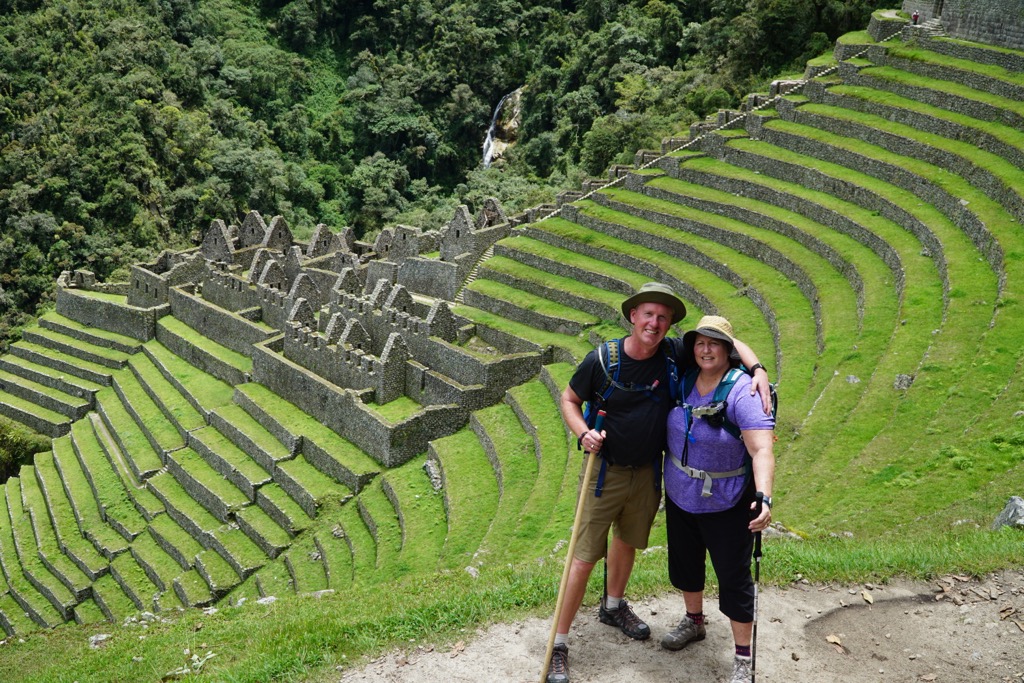 This was basically the end of the uphill part. Both of us were extremely happy about that. The next couple of hours were pretty easy and we made good time. At some point along the way we even passed the larger group, saying our cheerful hellos as we passed.

The first big surprise of the afternoon came when I came around a corner and in the middle of the bridge ahead of me was a Spectacle Bear! It saw me and quickly headed the other direction, while I fumbled to try to unclip my camera. It moved off the path but Fernando advised us to just be quiet and wait. Soon we saw it again climbing across the limb of the tree. 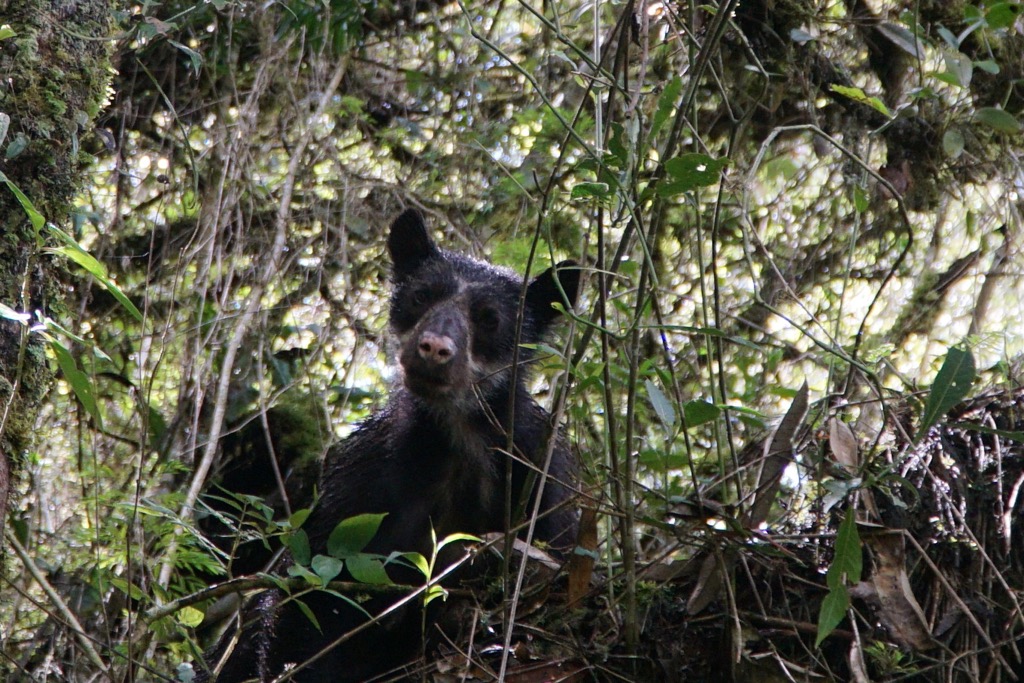 Our guide had told us about the bear earlier, and we knew that it is one of two bears in the world that are vegetarian. He also said that this was only the second time in 25 years that he had seen one up close like this.

A bit further along we arrived at the first part of the trail where we started to climb toward the Sun Gate. Then we walked some more and came to the second part of the ascent, and then we arrived at the really hard part. You can get a good idea of how steep this was and a view of my best side. 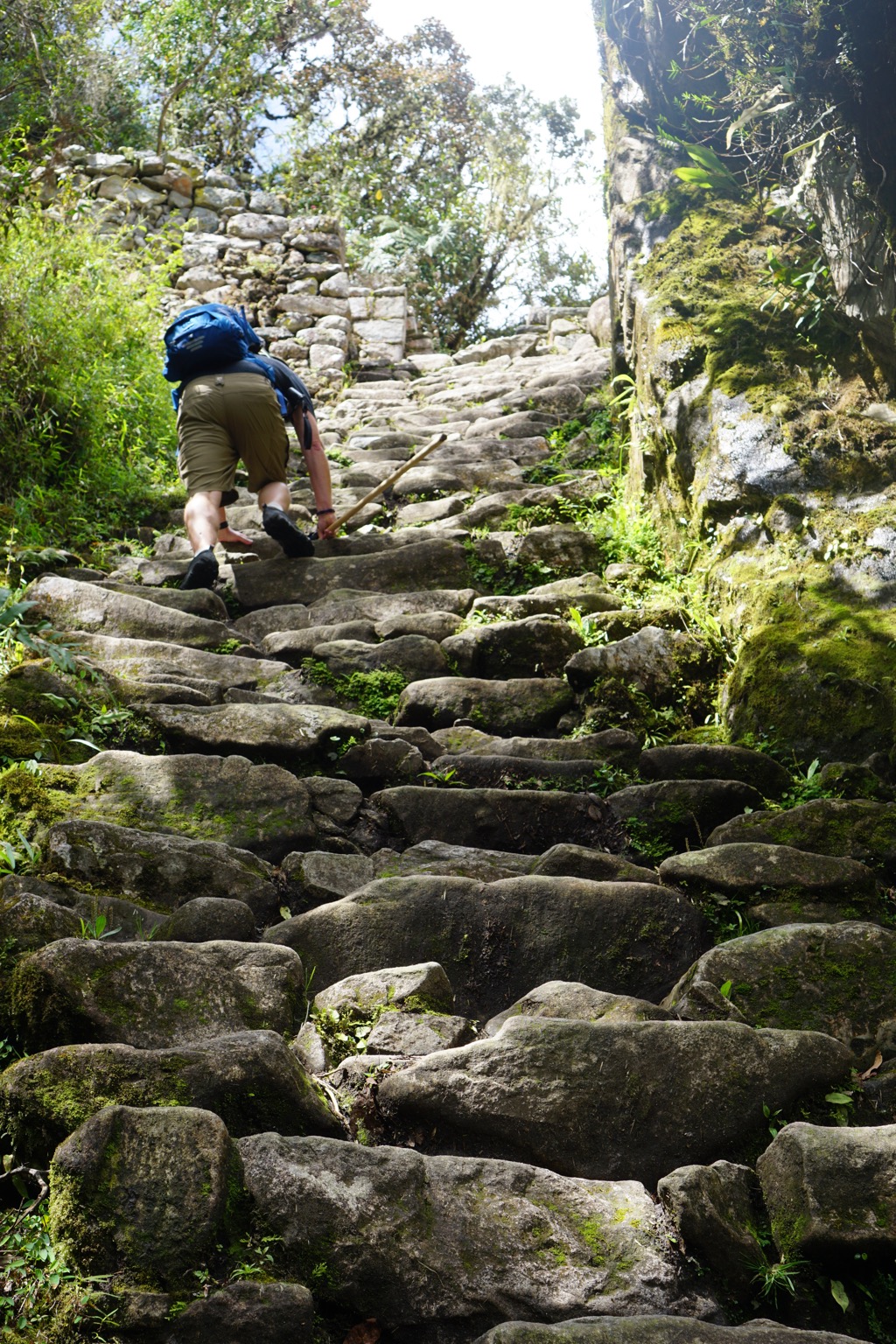 We thought we would be there but we still had 10 more minutes of walking and another bunch of stairs yet! But when we finally got to the end it was so worth it! And we had the view all to ourselves. 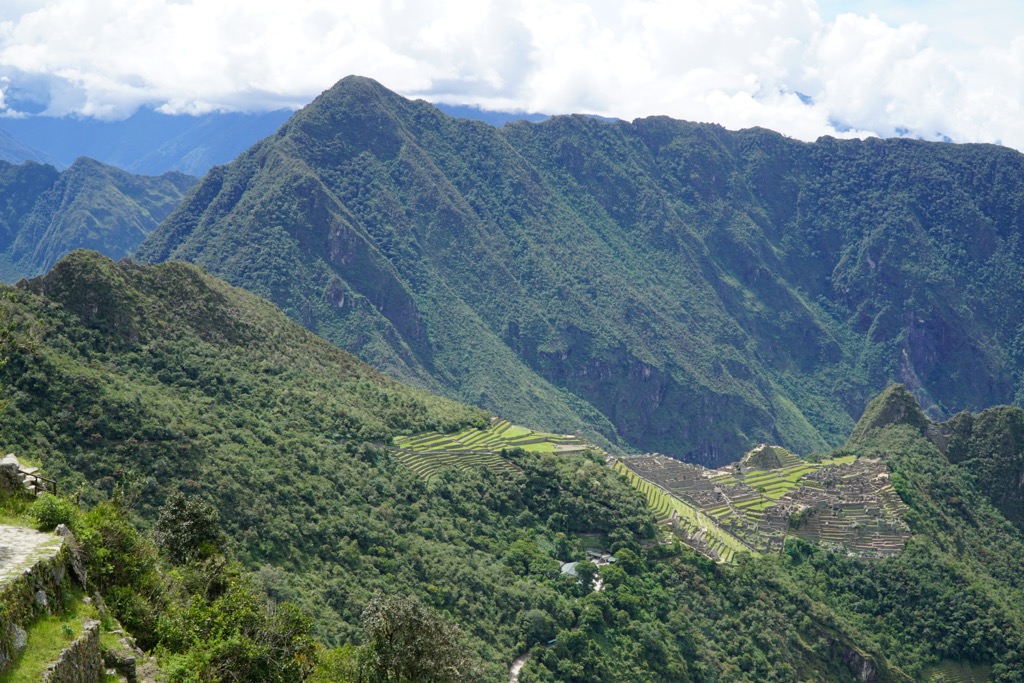 After taking in the view, we moved off to the side where we could site on a nice ledge and have a snack and continue to enjoy the view. At this point the group of nine, that we had passed at some point during the day, came through the Sun Gate as well. We exchanged greetings and discovered that the group was from Minnesota and Iowa. This led to what part of Minnesota, what part of Iowa questions etc. When I said that we had recently moved to Minneapolis from Decorah, I heard a voice say “Brad!?” And this was the second big surprise of the day. Sure enough two of the People in this group were Kurt and Paula Meyer, fellow Luther alumnus and Paula had also been chair of the board of Regents when I served as faculty representative! Amazing!! Four Luther alums on the Inca Trail arriving at the Sun Gate within minutes of each other. What are the chances? Sounds like a data science question. 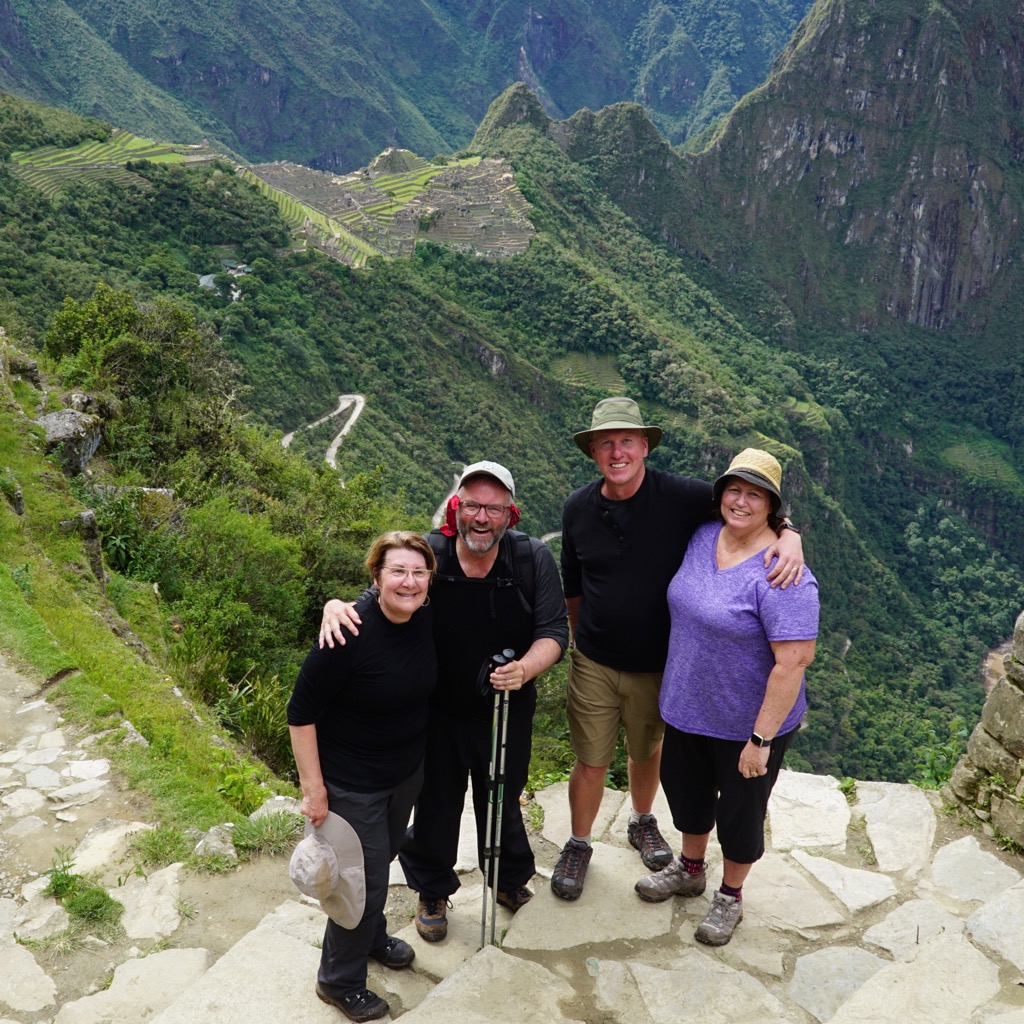 We discovered that we were staying at the same hotel that night, so we said our temporary good byes and we all headed down the final part of the trail. Along the way down we had our third big surprise. Jane was using her hiking poles and poked a viper. Our guide advised us to hurry on by and not pause to take any pictures of the poison snake. So we did.

When we arrived at the bottom we still had to take a bus further down the mountain to Agua Caliente and then a short walk to our hotel, the Inkaterra. At checkin we had the option of the 6:00 or the 8:00 seating for dinner. We thought that maybe a dip in the hot springs (Agua Caliente) would be a good way to relax and rest up for the 8:00 dinner. But by the time we had our complimentary Pisco Sour and chatted about our day with bob and Bonni, we decided that we didn’t have the energy to make it until 8:00. So we switched to the 6:00 seating and we are so glad we did. We were so tired and sore from our day of hiking that we were laying in bed reading by 8:00!

Tomorrow we go back to Machu Picchu to get an up close look!