And so it begins.  Another travel adventure.  This one just Jane and I.  The itinerary is a South American Cruise from Buenos Aires, Argentina around Cape Horn and up to Valparaiso, Chile; with many stops along the way.  Here's a summary of Days one and two.

We left Decorah with our friends John and Llew at 8:00AM to drive to the airport, we have several plans for getting back from the airport -- the nice thing is that we didn't need to park our car at $20 per day for 16 days.  While we are away Josh and our God daughter Liz are in charge of the house.  Decorah friends take note of that last sentence!  We are flying American all day, and of course the first face I see when we get to the American Counter is the infamous Cat -- see my first post from JTerm travels.  Luckily we got our luggage checked in just fine without her.  When we got to the gate we checked with the gate agent to see if we could change our seats on the Dallas to Buenos Aires portion of the flight.  I really wanted to find a seat with a power port.  Nine hours in the air could require a recharge of the iPad.  She was so nice that she moved us to a bulkhead/exit row seat -- nine hours of legroom!!

The rest of the air travel was uneventful, and we arrived in BA right on time.  Jane and I both managed at couple of hours of napping during the night, but nothing particularly restful.  BA is 3 hours ahead of central time so jet lag is not going to be a big factor.  Once off the plane we had to go through immigration and passport control.  We have to pay $140 each to visit Argentina, this is listed as reciprocity for the Visas that we make the Argentinians pay.

The plan was to get through immigration as quickly as possible and get on our car to the other airport (Jorge Newberry) where we are taking a flight to Iguazu for two days before the cruise.   We had reserved the 3:05 flight but were really hoping to get to the airport in time for the 11:35 flight.  We knew it would be tight but were hoping to avoid spending valuable hours in the airport.  Here's where the plan started to fray...  After paying our reciprocity fee we got shunted out of the line for people from the US into the line for Argentinians and other visitors.  This line ended up being much longer and slower.  As the minutes ticked away we resigned ourselves to an afternoon in the airport.  We did meet two very nice women who were traveling alone, one was going to antarctica as part of an academic expedition and the other was celebrating her birthday by going horseback riding.

We ended up sharing our car with Denise -- the horseback rider -- The drive from BA International to Jorge Newberry is supposed to take anywhere from 15 minutes to 3 hours depending on who you read and what time of day, our drive was a harrowing 45 minutes.  Drivers here make up their own lanes and rules as they go along.  We got to the airport just after 11:00 which we were sure was too late for the 11:35 flight.  But luck was with us and the flight was delayed by an hour, so we were able to change to the earlier flight  -- with no change fee!

We cleared security and found our way to gate 3 where we met up with several people from the cruise critic message board, I'll just call them the CC people until I get to know them better.  Jane has been conversing online with some of these people for almost a year, and it was fun to meet up with some fellow americans to pass the time.

We arrived at the Iguazu airport, and the plane parked at one of the two gates.  We waited forever for Jane's bag, and then got a cab to the Sheraton, which is located in the Iguazu National Park.  To summarize, we left Decorah at 8:00AM on the 24th and we arrived in Iguazu at 3:00 on the 25th.  A long days of travel! Just as we left the airport it started to rain, hard!  But, by the time we got checked in to our room and started to think about what to do with the rest of the day the rain stopped again.

Iguazu is amazing!  The falls here are huge, you just can't believe the volume of water that pours over these things every second.  For those of you as old as me who are into movies at all, these falls are the sight of the movie The Mission.  Here's one picture to whet your appetite. 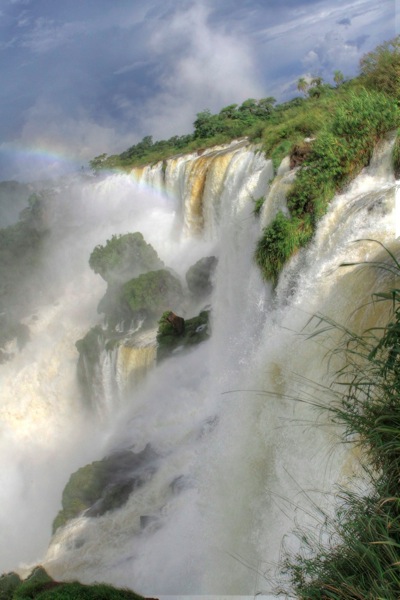 I took this one on what is called the upper falls hike.  Its probably the driest hike we are going to take.  Next up is the lower falls hike which I will do in my swimsuit, and a boat ride that goes right up to the falls.

To finish off the story of our first day, we met up with the CC group again to have a drink in the hotel bar and dinner together.  I think this is going to be very nice to know a few people going into the cruise.  The dinner was pretty good.  Jane had seafood risotto and I had a nice Argentine steak.  The funniest thing was that Jane got dripped on through a leak in the roof when the rain started up again.