According to our dive logs it's been 13 years since we did our last dive. So, when we decided to make a last minute trip to the Caribbean for Spring Break this year we decided that one of our activities should be a refresher dive to get current. This turned out to be a great decision. We thought that doing the refresher early in the cruise would be good, since it would allow us the flexibility of doing a second dive later on. The bonus was that the Bucket Regatta was happening in St. Bart's so the dive turned into a dive plus several hours in a Zodiac "chasing the race" Wow!!

We arrived at the pier at 9:30 and we were greeted by a French woman, Isabelle. She was busy unpacking tanks and BV's etc, but was very friendly. We asked if we needed to do any paperwork, assuming the standard waivers etc. "No, we are French" she said as if that was all the explanation we needed. We were joined by a dozen other French speaking people, all much younger than us. When did this happen? We used to be the younger ones on these adventures! It was totally unclear which of them were assistants, and which of them were other guests like us. After getting everyone organized, Emmanuel, the Captain, told us that we would be diving with Elizabeth. "Who is Elizabeth?" I asked. "She is the blonde Woman, my wife. my wife" he said with a grin. The refresher turned out to be just the perfect amount of review. It's just like riding a bike Isabelle told us. She was right. After a few minutes we were enjoying the freedom of exploring the reef.

Under water we saw, a couple of Barracuda, a sea turtle napping in a little alcove, a bunch of HUGE lobster, and a couple of grouchy eels. We also saw the usual assortment of Tangs and Wrasse, Parrotfish and Lionfish. After a slow start, my ears started to clear a bit easier and I made it down 60 feet. A very good dive. A day later, as I write this I'm still waiting for my inner ears to clear, which is a problem I had 13 years ago. It's not painful, just a bit unpleasant to hear the world a bit muffled.

With the diving done, the next part of our adventure was just getting started. As usual, I guess I hadn't really been paying attention, but the bonus part of our dive was that we were now going to "chase the race." We knew that there was a huge regatta happing on St. Bart's, but to follow the sailboats in our Zodiac was a real experience. First, the beauty of these huge boats is just amazing. With the sun gleaming off the huge white sails they were really spectacular. It was shocking to watch them fly past us completely silently, listing 30 degrees or more with their sails full of wind. As you can see these were not small inexpensive sailboats either, these were big luxury boats! 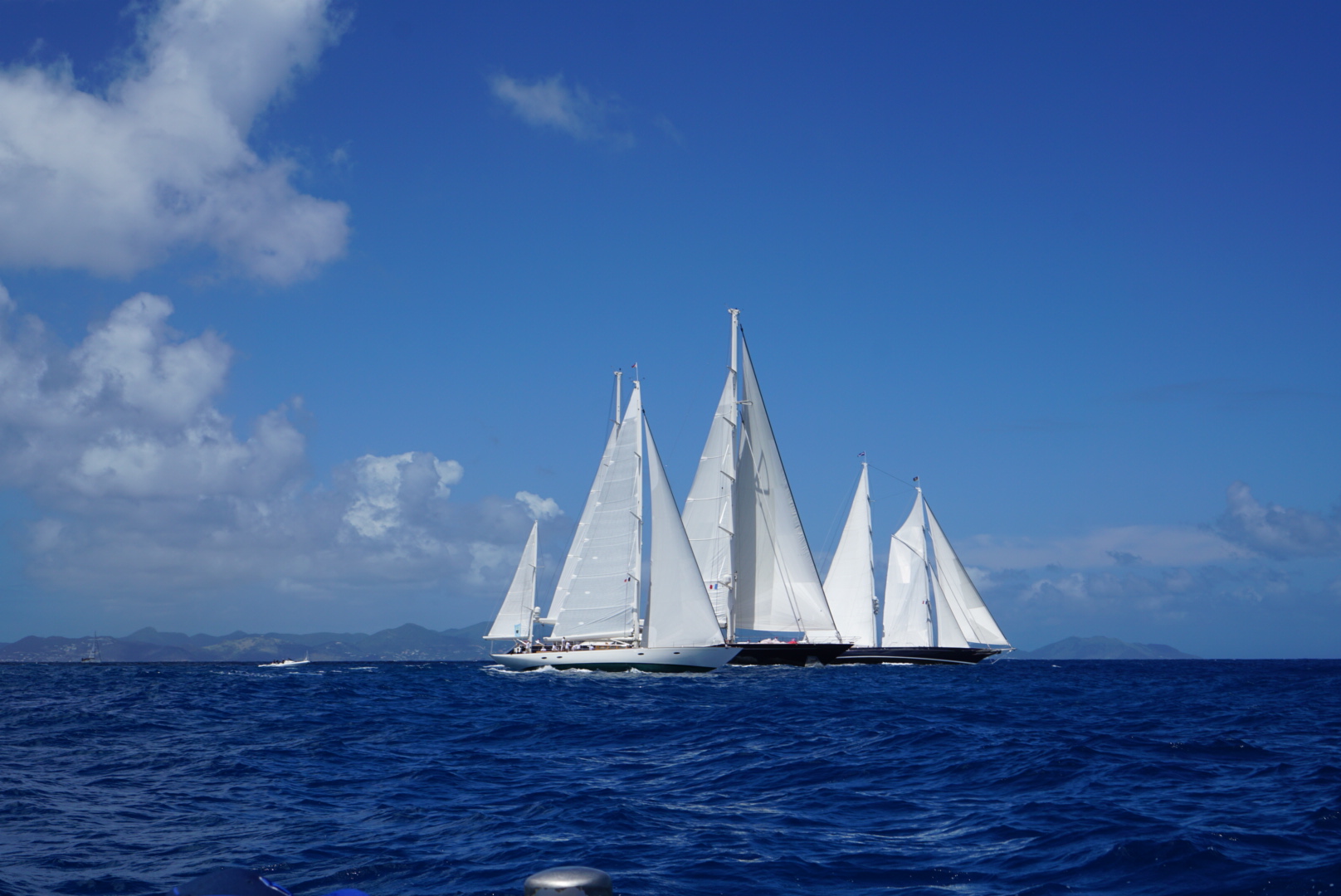 In addition to the excitement of chasing the boats, and it is really interesting how close we got to several of them, 30 - 60 feet probably. Close enough to greet the crew! But the swells today made for a pretty fun boat ride. Its always a little weird when you are in the boat look up at the tops of the waves! Emmanuel was clearly having fun driving and getting us airborn. Isabelle kept giving him the kind of stern look that says, "maybe you want to slow down a bit?" But he didn't seem to notice, and we didn't really mind.

In total we made a complete circle of the island, and when we made our turn to go with the wind, and "surf the waves" for a smooth ride home we were also rewarded with the site of one of the big ships letting out its spinnaker! Up it went, and then Boom! the sail filled with the wind that would propel it toward the finish line. You just can't believe how big those sails are until you are right there when they go up. 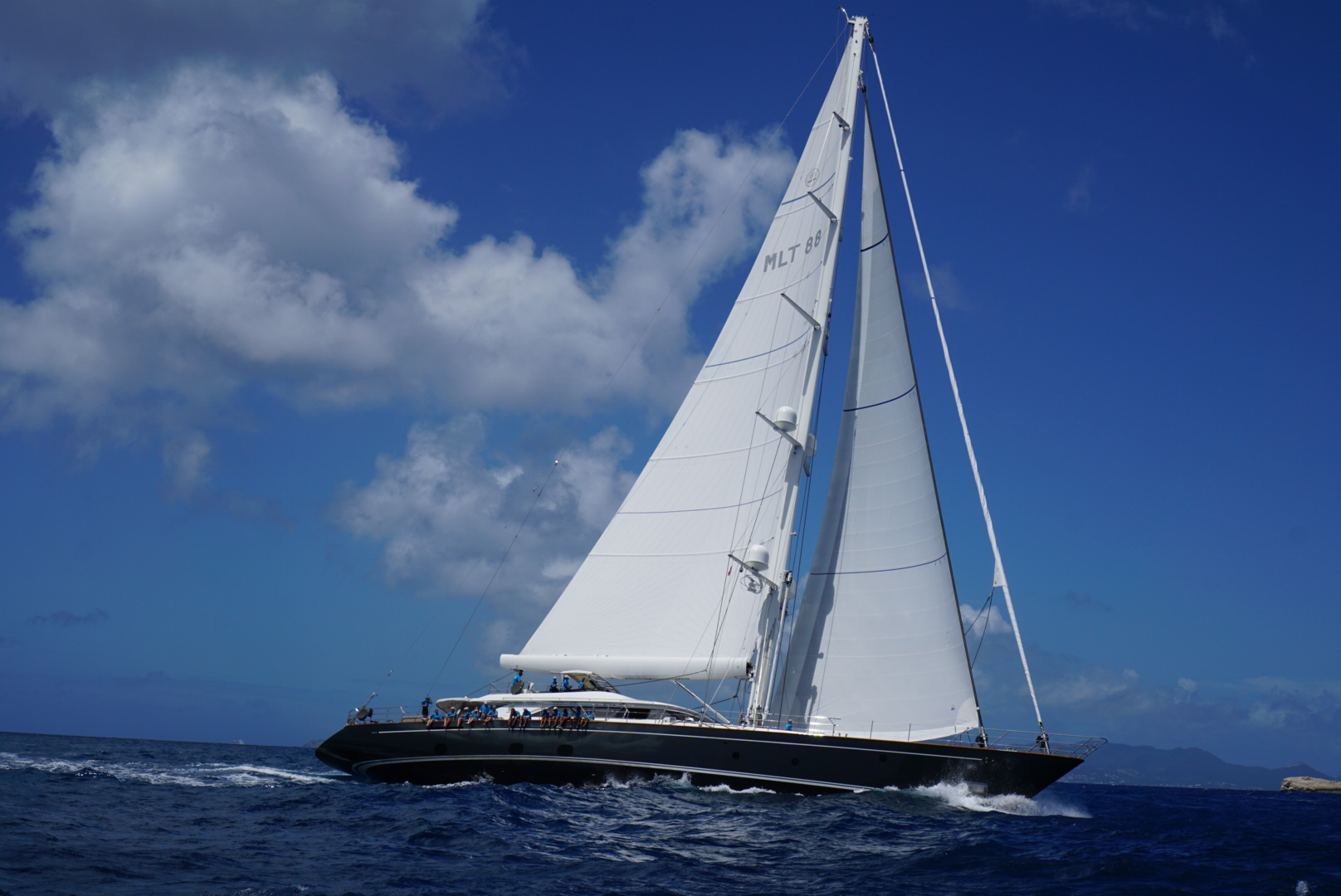 Soon after that we were back at the pier and unloading our gear. Sunburned and very tired from a day in the sun and water. We had to hike the long way back around the bay to get to our pickup with the ships tender, and we realized then how intense the sun was. We just missed the tender as we came within site, but 15 minutes later they were back and without waiting an extra minute we were on our way back to the SeaDream I.

Somehow we managed to stay awake until dinner time at 7:30, and we chose to eat outside. Jane had Lobster and I had a really delicious Veal Saltimbocca. We were joined by our new friends from Florida and had a very nice dinner. We are definitely enjoying our time here on the SeaDream.