We just boarded the train from Bern to Laussane, we are on the upper floor of our coach, and packed in like sardines.  There is not nearly enough room for luggage storage so our suitcases are on our laps, and in the aisles and generally anywhere we can find room.  Its a bit crazy and all of our traveling companions that were already aboard the train must really wonder about this group of Americans.  Thankfully we only have an hour on this leg of the journey and then we are in Lausanne. 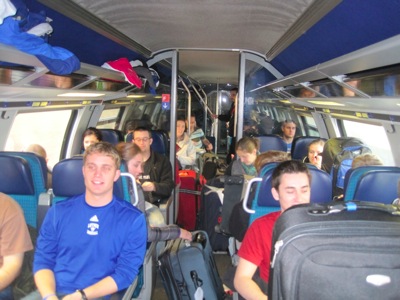 Just before we left the hostel this morning we had another casualty.  Josh was zipping up his suitcase in the lobby and it exploded, just like in the movies.  The zipper is shot.  So, the helpful woman at the front desk provided us with some packing tape!  Jeff and I held the suitcase while josh wrapped it about 8 times around with the packing tape.  This will get him from Interlaken to Lausanne, although I did pick up one sock that fell out along the way.  Luckily I saw Josh washing clothes last night so I was pretty sure it was a clean one.

Meanwhile, here's an update on skiing etc.  I turned in my snowboard for a pair of skis and boots.  As a result, yesterday was extremely enjoyable.  I skied with Craig, Nick, Jessica, and Camille.  Mostly the red runs all day long.  Even though I haven't been on skis for a few years it came back right away.  The views were spectacular, although the runs were still pretty icy in many places.  I felt much more confident on the skis than I did on the snowboard and so was able to enjoy the day much more.  We took the train all the way to Kleine Scheidegg which is the highest point the train goes that serves the ski villages and lifts.  We were able to get several runs in on each of the three lifts that start in the Kleine Scheidegg area.  We skiid the Lauberhorn run which goes all the way down to Grindelwald, then took the small trams back to Mannlichen and worked our way over lift by lift to get back to Kleine Scheidegg.  We were very hungry by this time so we had lunch and then skied down to Grindelwald train station and declared victory.  Much fun, and no injuries in the group! 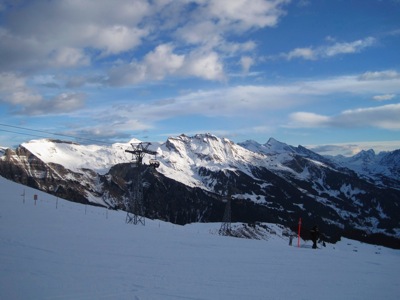 Later, back at the Hostel, as I was coming up to check my email Matt asked me "Where is the hospital?"  Oh good God I thought to myself.  Yes, we have another injury.  It turned out that Nody separated his shoulder.  At least this one is not a going-home kind of injury and won't really slow him down.  The only thing will be that someone will have to carry his backpack.

So, now we need a luggage porter for Aaron, and a backpack carrier for Eric.  We are very thankful that the skiing portion of the trip is over.  Just now one of the students said, hey lets try ski jumping when we're in Lausanne!   I think its time to nix that idea before it catches on!