The flight from Puerto Moldenado was blissfully short. It was almost comical how many first time fliers seemed to be on our plane. When we left the runway there were gasps of joy and cheers all over the plane. There were also a lot of children making a lot of noise. Jeez I sound like some cranky old man! But we had barely leveled off before we were getting ready to land again. It was a 40 minute flight but according to Maps a 9 hour drive!

We were met by our friendly guide Fernando who will be with us for our time around Cusco. He had water waiting for us — Hydration is important at altitude as well as a nice hot cup of Coca tea. Also good for helping you get acclimated. Today we were just going to see a bit of the Sacred Valley, a local market and have a bite to eat before checking in to our hotel — Luna y Sol.

The picture below shows the spectacular view of one of the many valleys we saw. The whole base of the valley is filled with CORN FIELDS. They have a huge variety of corn, purple, yellow, red, white and other colors, and the kernels are the size of marbles. It a very important part of the local environment, and they even brew beer with it called Chicha. We have yet to try Chicha, I think it is mostly for the locals. 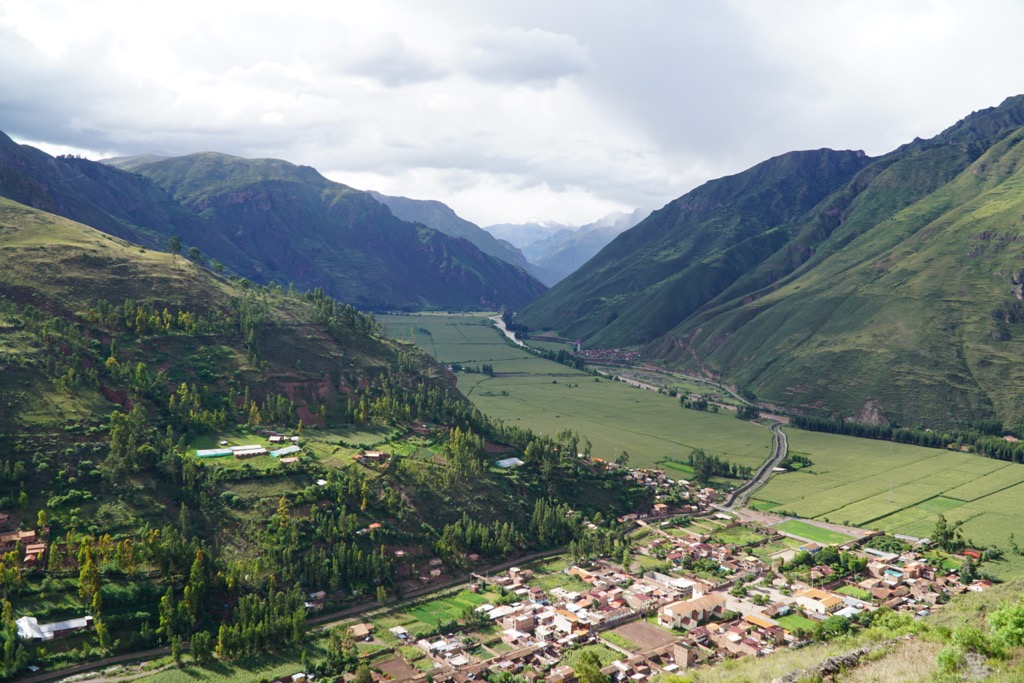 We did a little shopping at the local market where Jane bought a hand made silver necklace, and we enjoyed a delicious meal... It seems there is no avoiding chicken and rice in Peru. Thankfully they cook it in many different ways! We checked in to the hotel and were immediately captivated by the Jacuzzi!

Our schedule for the next day was for our guide to pick us up at the very reasonable hour of 8AM! This day we had three amazing stops. First was a textile demonstration at a women’s cooperative in Chinchero. It was fascinating to see the hand weaving and how much work goes into making blankets, and belts, and sweaters, and yes ponchos. it may not have been the smartest purchase I ever made, but if you see me wearing it around the cabin or the city you will know that I am wearing a hand made, waterproof, Alpaca poncho. Don’t worry, I didn’t buy the hat! 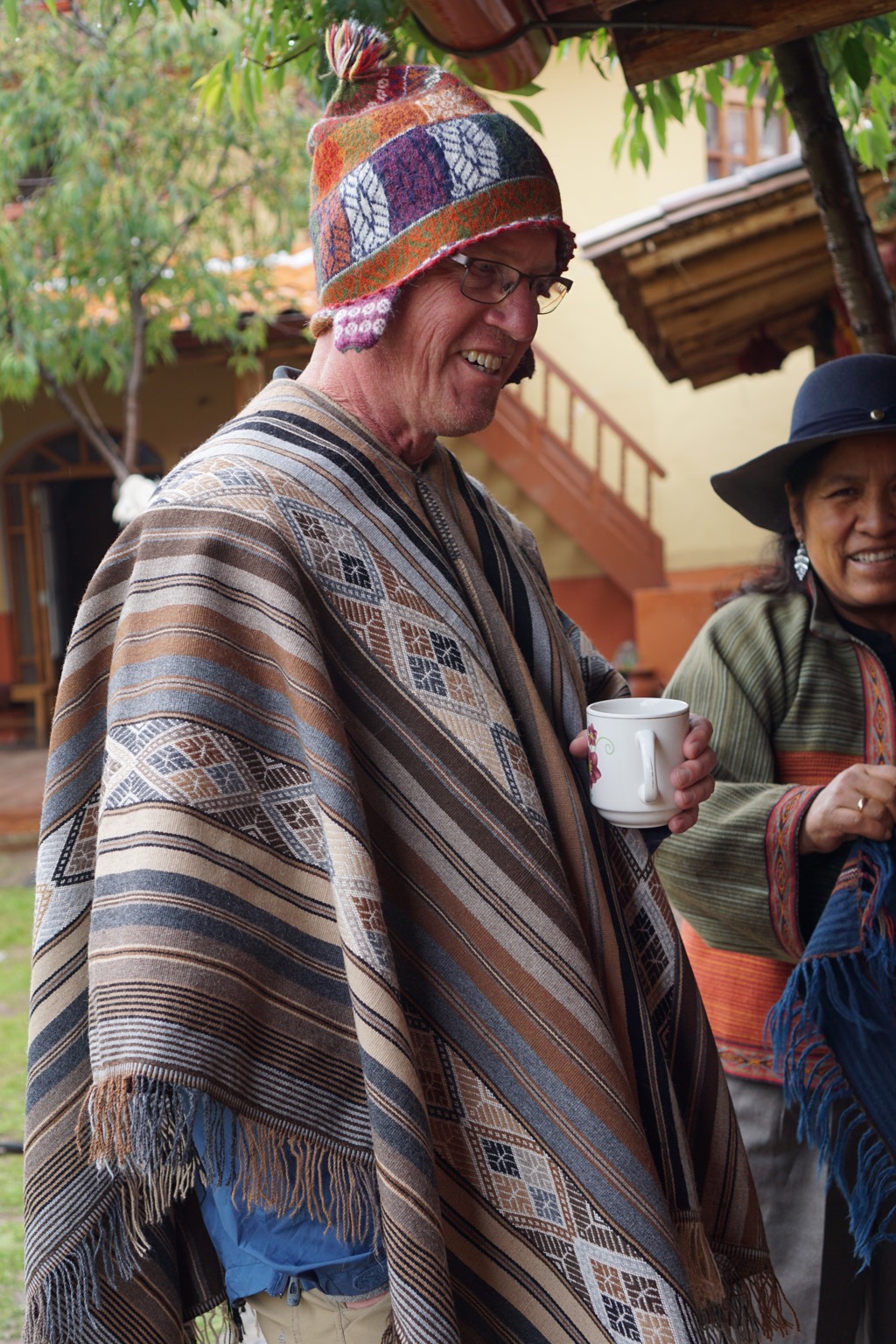 Our next stop was the terraces of Moray. I was not prepared for this at all! 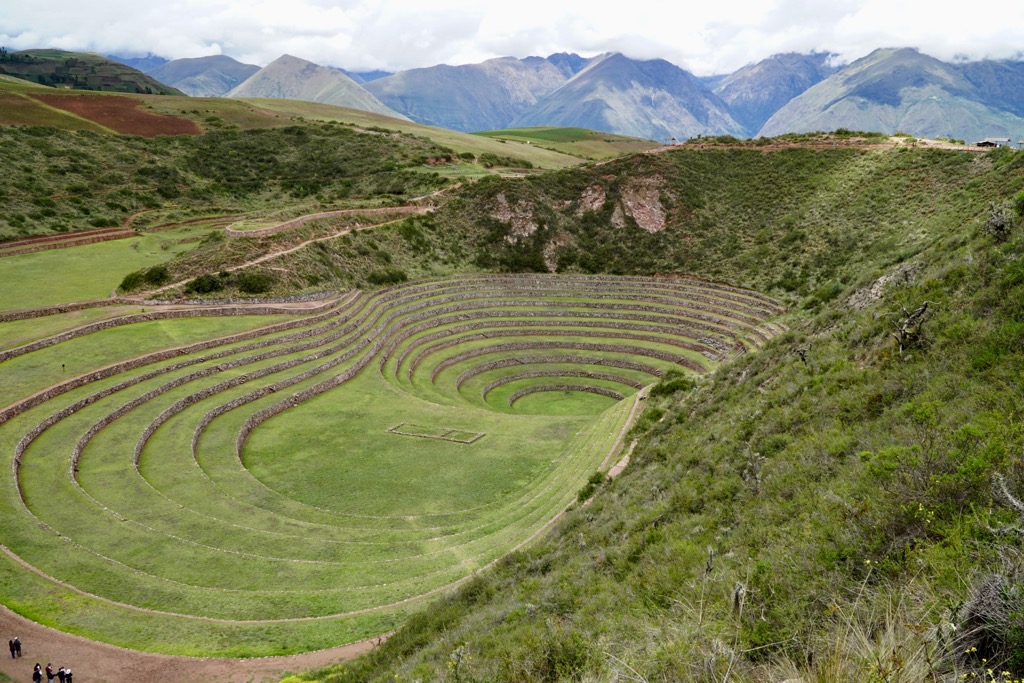 Were they made by Aliens? What were these for? Who made them? According to our guide these were constructed by the Inca people between 1000 and 1400. Research indicates that these terraces were actually agricultural laboratories! By studying the DNA in the soil they have found that they were learning how to grow many different varieties of potatoes at different altitudes!

It blows me away sometimes to think about the knowledge that we have lost over time. When the Spanish conquered the Inca king and subdued the people and stopped their work, think of the progress and the knowledge that was lost. I’ve had this same thought in many parts of the world such as Pompeii. It makes me appreciate Google’s mission to organize the worlds information and make it universally accessible and useful. It also makes me wonder what could cause the loss of all of the information stored in the Google database? What could cause a similar collapse of a technological empire such as the world we live in today?

We learned that Inca is not really the proper term for the people, the Incas were the rulers the people were Quechua. Our guide explained that it would be like calling all of the Egyptians Pharos. I’m sure we will learn a lot more of their history when we visit Machu Picchu.

From the terraces we continued on to the Maras salt pans. Here we saw 5000 small salt pans where people make salt that comes from a salty spring. Deep in the Andes there is a giant salt deposit that this water works its way through, it then flows down this valley and through the many pans that people have created over the years to make salt. Nowadays they actually make more money from tourism than salt, but I can’t help but think that is a short term setback until some marketer comes along and makes Peruvian Pink salt the next hot commodity for home gourmets. 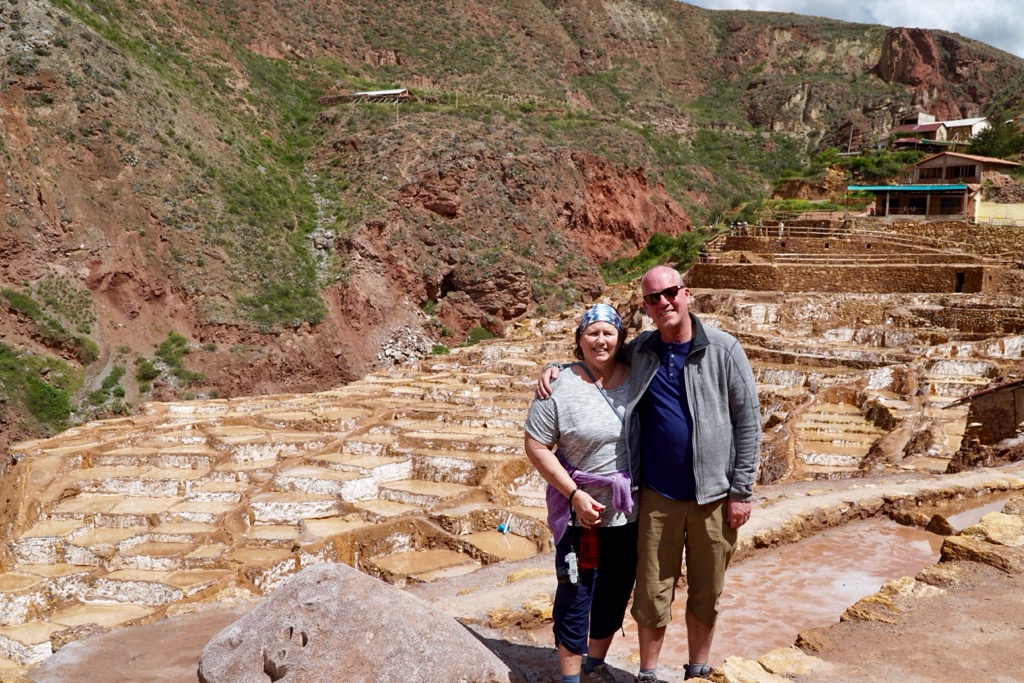 By the time we finished with all of this it was time for a late Peruvian lunch (2pm) which we enjoyed in the company of our guide and driver all the while just looking at the mountains that surrounded us on all sides. It really is beautiful here in the Sacred Valley! 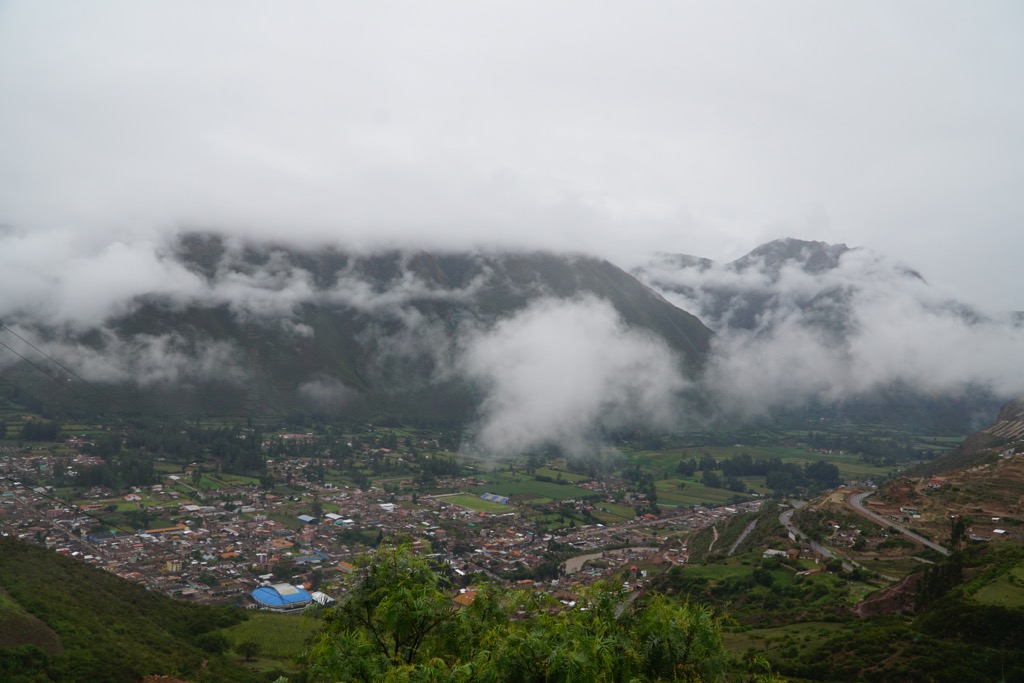 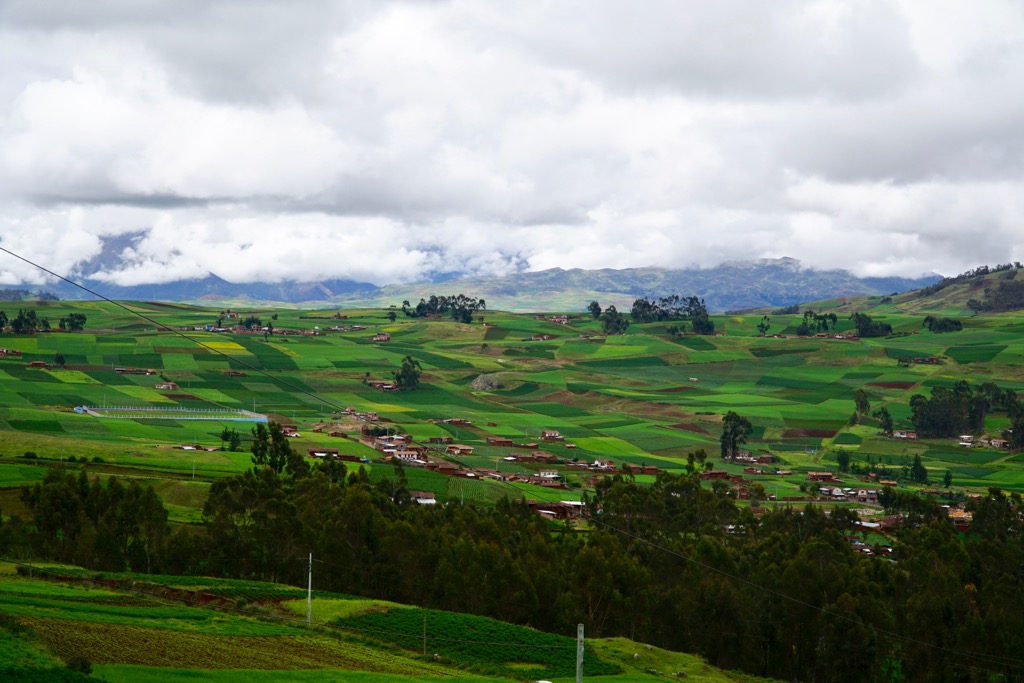 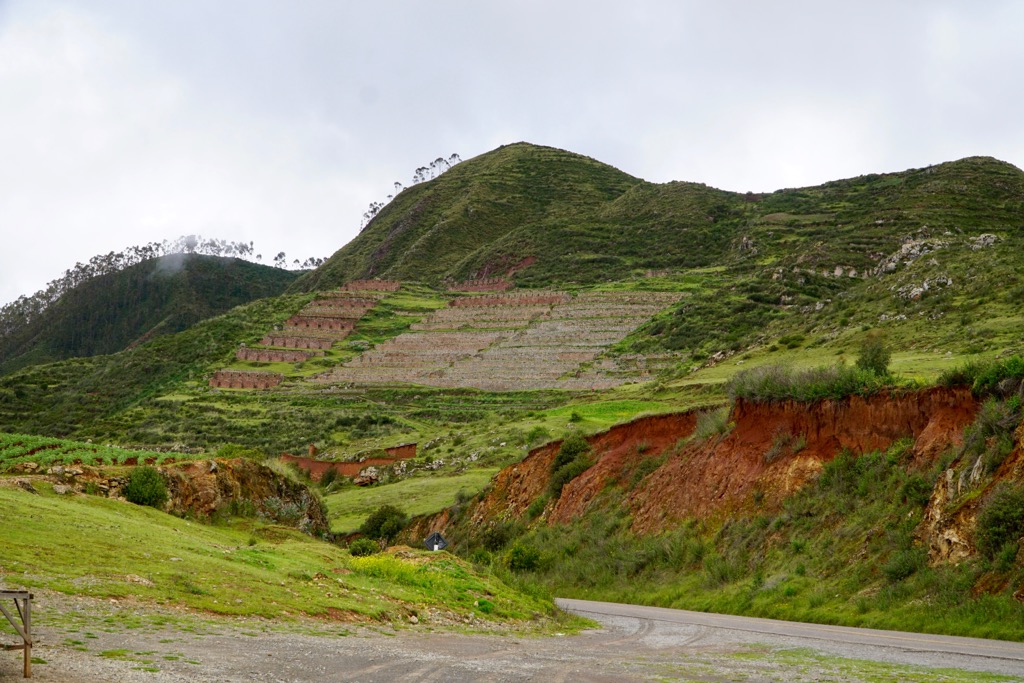