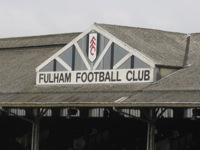 I can't think of a better way to end a trip to London that with a Premier League Football match.  We were very fortunate to get group tickets to the Fulham versus Stoke City match this afternoon.  Fulham plays in a venue known as Craven Cottage.  Its a smaller, more intimate stadium, but we ended up with great seats.  We were in about the 24th row behind and to the keepers left of the goal.  A high hard kick over the crossbar would land right in my lap. 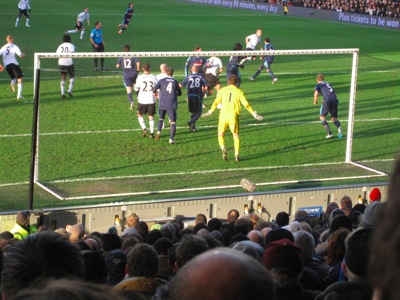 Fulham won the game handily 2 nil with Clint Dempsey scoring both goals for Fulham.  We thought, briefly, about a USA USA chant for Dempsey, but decided that might not be appreciated by all of the other football fans around us, so we just cheered loudly.

Going to an English Premier League match is a fun experience. We sat in the neutral zone of the stadium so we were not right in with the Fulham or the Stokes City fans.  So our section was a bit quieter than all the others.  We were the closest to the Stokes City visitors section and it was really a riot to listen to them sing, and chant, and carry on throughout the game.  They only quieted down about midway through the second half when it became very clear that there was no way they were going to win the game.

There were a couple of Dads right behind me that had brought their two young boys to the game, so it was interesting to listen to them explain football to the boys, who already knew as much about the game as many of us.  It was a great experience and one that I will remember fondly for a long time.

The last few days are really a blur.  We have had more great meetings and class discussions, and finally some time to explore the city on our own.  Quite honestly I'm 'museumed out' at the moment.  I've been to The British Museum, The London Transportation Museum, the Tate Modern, The London Docklands, The Imperial War Museum, and the British Library.  All were interesting in their own way, but you get museum, and information overload at some point.

A couple of the highlights for me were the Transportation Museum, seeing the development of the London Underground, beginning in the 1830s and moving forward is a pretty interesting study in engineering, and city planning.   The development of tunneling technologies, and the escalator were really interesting.

Another highlight was seeing a letter from Ada Lovelace to Charles Babbage at the British Library.  The library has labelled this letter as the first computer program, as she is explaining how to program the difference engine to solve a mathematical problem that had never been solved by hand before.  Also at the Library was Handel's original score for the Messiah!  You could see his notes as well as the names of the soloists that were performing the different parts.  They also have one of four copies of the Magna Carta on display.  This is a document written in 1215 or so, and is widely considered to be a model for our own constitution.

Last night we had our final group dinner in London, and the Imperial China restaurant.  We had our own room, with a Karaoke machine and a special menu.  Tons of food, and great fun was had singing karaoke by all.    Here you can see Paul, Joe, and Carl treating us to a country song.  We also had Rap, Glen Campbell, and even a couple of Disco numbers.  It is really strange to think that all of these students know the lyrics to every Backstreet boys song ever written. 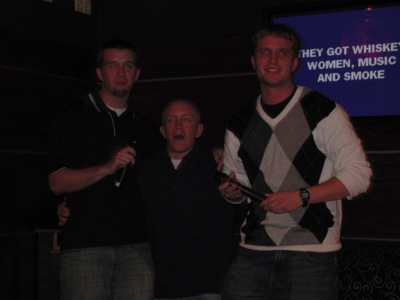 Tomorrow is an early morning as we have to be on the Tube going to heathrow by 7:30.  We leave London at around 11:15am and arrive in New York at about 3:00pm.  We've all enjoyed our time in Europe, but we are also ready to be back in the states again.  I know that even after a proper football game this afternoon, a number of the students are hoping to make it