I'm sitting here watching the sun come up over the city of Punta del Este.   The water is perfectly calm except for the waves created by some of the tender ships taking the earliest of early passengers over to the pier.  There are plenty of clouds in the sky today, but there is still the occasional blue patch.  We are close enough to shore that we can see the beaches spread out in all directions.
We don't have anything planned for today except to tender ashore and walk around for a bit.
Yesterday we were in Montevideo, we had arranged a tour with Marta along with a group of people from the cruise critic message boards.  It was a driving/walking tour of the city, along with a stop at the Bouza Winery just outside the city.  The winery is only about 10 years old, which is about the average age for wineries in Uruguay.  Since it is getting toward the end of summer here they were just starting the harvest, so we got to see some of the equipment they were using for squashing and processing the grapes.  There were also a lot of very ripe grapes on the vine. 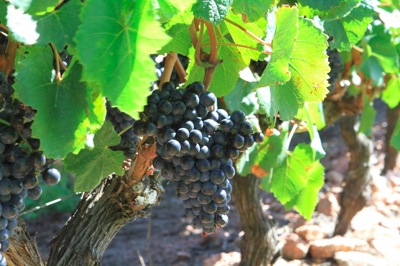 Here is the aging room where they age some of their wines.  Some of the barrels are made of french oak, and some of american oak.  The winery is pretty scientific about how they keep track of which batch of wine comes from which section of the vineyard.  They also keep 20 bottles from every harvest for every different kind of wine they make. 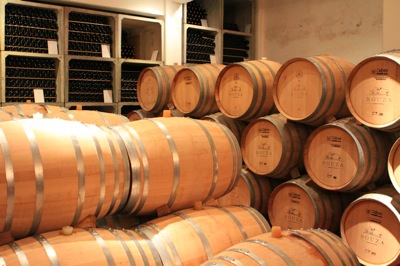 After the tour, of course we had to do a tasting. We had a white blend, along with a rose, a merlot, and a red blend.  We asked to try their Chardonnay and their Malbec, unfortunately they only had the chardonnay left for tasting; it was good but I actually liked the white blend we tried originally better.
After the tasting, we were all tired... Big surprise right!  But we had a little more touring left to do.  We climbed montevideo's only large hill where we were treated to a great view of the harbor and our ship.  Its right in the middle of the photo below. 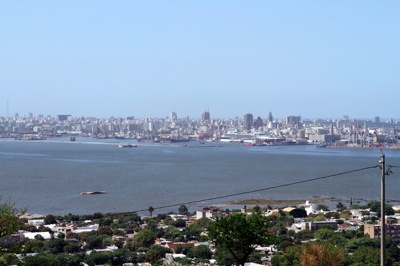 Overall it was a nice tour.  Last night was the first formal night on the ship, and it was fun to get out the old tuxedo again and enjoy some good food and a nice show, iBroadway.  Jane and I can both check frog legs off the list of foods we have tried.  Guess what?  They taste like chicken.