Have you ever had an experience where afterwards you said, "it took my breath away!"?  Today was one of those experiences for me.  I was awake, with the sun, at about 6:30 this morning;  3AM back in Decorah, but we were so tired from the previous two days that we were in bed before 10, and slept soundly through the night.  After having some coffee and breakfast in the hotel, Jane and I took off on the "Inferior Falls" hike.  The inferior falls trail is the lower trail that takes you down to the base of the falls and the river.  We were literally the only ones on the trail, and it seemed that around each turn there was a view of the falls more beautiful than the last.  I posted a bunch of photos to my flickr account, its a lot of waterfall pictures, but you just can't capture the beauty of it all with a camera.  I've been experimenting with the exposure bracketing feature of my camera, and so some of these are three images combined into one using the HDR editor on Aperture.

As we neared the bottom of the trail we spotted a pair Toucans up in the tree, along with several other interesting birds. You can see the Toucan in the picture below.   At this point we were also able to buy our tickets for the boat trip under the falls....  But first there was a walkway that went right up to the falls. 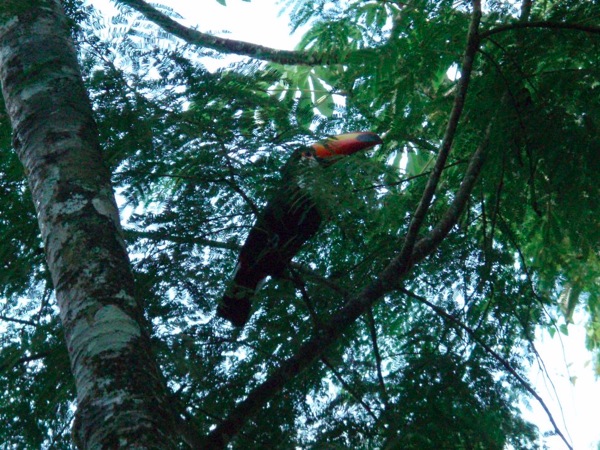 I am the person in the mist in the picture below.  This was one of those wild kingdom kind of moments..  In your best Marlin Perkins voice you can say:  "While Jane stays safely dry at the beginning of the platform Brad will tame the raging river and get drenched."  And this was the experience that literally took my breath away.  You just can't believe the force of the falls until you get right up to it like I did.  The wind that is created by the crashing of the water is like being in a thunder storm, and before I even realized what was going on, I was completely soaked from head to toe.  Between the force of the wind, and the perceived force of the water my breath just went right out of my lungs. 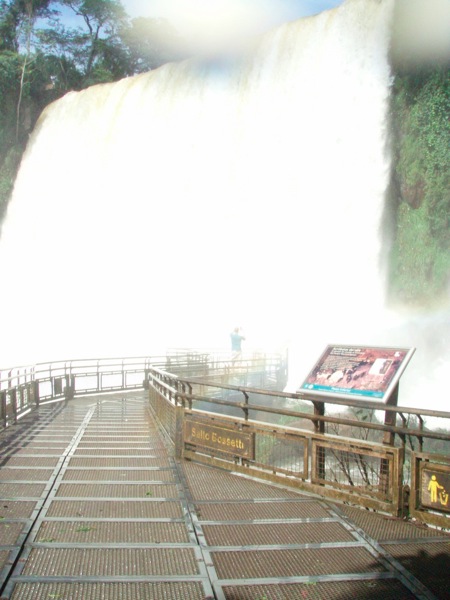 As I think about my own experience standing at the end of the platform, I have to wonder about the people that built this thing!  Who in their right mind would go to work each morning,  to build something where you were thinking that if you slipped, (and I'm sure that during construction it was plenty slippery) you would get smashed against the rocks below you by water with thousands of pounds of force.

There is lots of wildlife in the park, we saw many species of birds, and a little hamster size rodent.  Others in our group saw a snake eating a frog -- sorry I missed that one.  But the most prevalent creature were these little things that we though were ringtail lemurs, but the locals had a different name for them.  Here's one of them begging lunch off another tourist.  Their snouts are quite long, and we were told that they are a member of the anteater family. 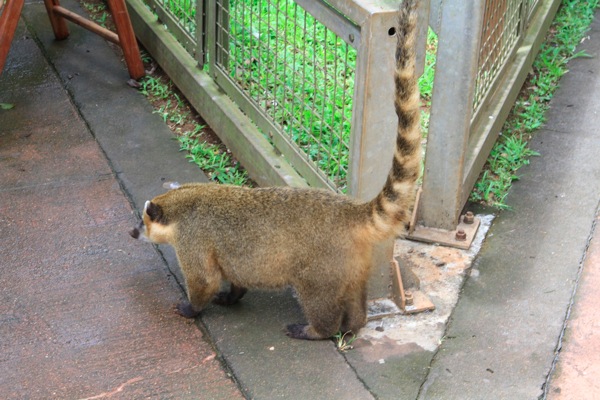 After our experience on the platform, our next goal was the boat ride.  On this ride you get some great views of the falls from the river, and assuming you have a waterproof camera, some good pictures.  Then after you have seen the beauty of the falls the captain of the boat plays a game called "lets see how close to the falls we can get without going under."  In the picture below you can see the boat ahead of us headed into the falls.  I'll admit that when I was standing on dry land and watching this I was thinking to myself, "who in their right mind would get into a boat and do that?"  But, when we were actually in the boat it seemed perfectly safe, and the boat was very stable. 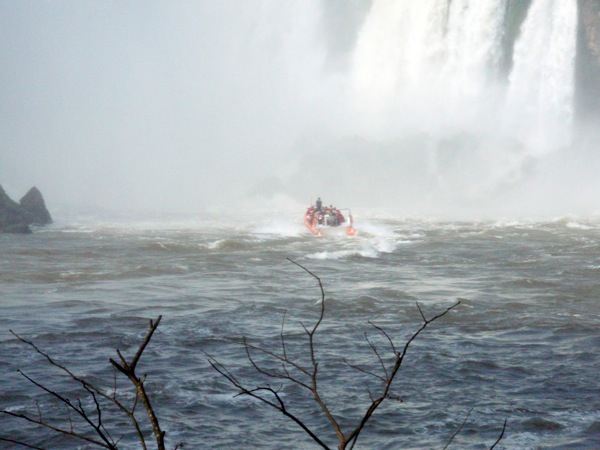 Jane had the Flip video camera inside a waterproof bag when we got on the boat but mostly the video is a wall of white, and sound.  Here's a little bit of video from when we are near the falls, but not yet in the roiling water:

We were really glad we did the boat ride, as we got to see the even larger Brazilian falls that you can't see from the hiking trails in Argentina.

After hiking back up to the hotel, we picked up my camera and got a new battery for the waterproof camera and set out for the train ride to El Diablo, this is another cool little hike where you go out to the top of the very large falls, and stand and watch the water spill over.  The water levels are quite high this year which makes everything even more spectacular.  Here's a couple of shots from the top of the falls.  Again, there are more without me in them on flickr. 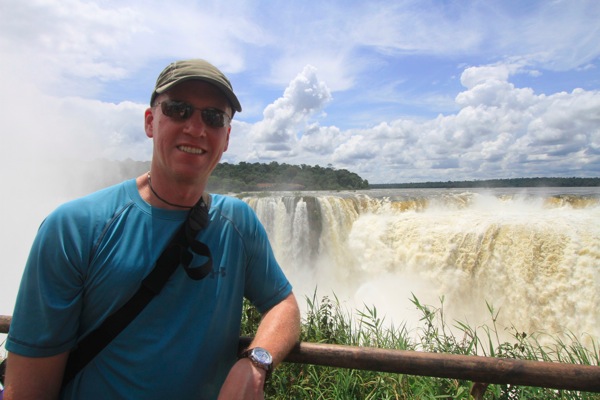 After all of this hiking in the Jungle heat and humidity, we were quite tired and hot, so we headed back to the pool at the hotel to relax and rest up for a while.  Our final stop of the day was back in the city of Puerto Iguazu where we had a dinner reservation at Aqva restaurant.

We booked a round trip cab ride (200 pesos) at the front desk, which turned out to be a great deal.  We had a very personable cab driver named Ronny, who took us for a little site seeing and shopping before dropping us off at the restaurant.  After dropping us off he waited for us to eat and then took us back to the hotel.  Before dinner we had a beautiful view of the river from the city, where you can see Argentina, Brazil, and Paraguay at the three corners of where the river splits.

The restaurant is decorated in Pacific Northwest style, and the food is a great blend of Argentinian and Italian cuisine.  We had a fantastic meal of Argentine steak and a lovely bottle of Malbec.  My steak came with a leak tart which was surprisingly delicious, and Jane had potatoes that were stuffed with cheese and ham.  The service was top notch, and we had the opportunity to chat with the owner, Jorge Antonio, who was very nice.... We topped off our dinner with a tiny bit of Limoncello.  The Limoncello was quite possibly the best we have ever tasted, so we asked the owner if he made it himself or imported it from Italy.  He said he made it himself and promised to share his top secret recipe with us if we sent him an email.  Just when we thought we were ready to leave the owner brought us a complimentary glass of Argentinian champagne to keep us happy for the ride back to the hotel.  If you get to Iguazu you should definitely check out Aqva.