As I  write this, I've been up for approximately 36 hours.  My alarm went off yesterday at 3:30AM Minnesota time and it is now 9:45, the next day, in Munich Germany.  Its been a good day, and we've covered a lot of miles, but I am definitely ready for some sleep.  I'm determined to make it until 10pm our time.

Its been a long day, and a number of titles for this blog entry have crossed my mind. "Hurry up and wait" was the first title that occurred to me as we arrived at the airport at 5:00AM.  The lines to check our bags with American Airlines and get through security were as long as any as I've seen at the Minneapolis airport.  We finally made it through security with just enough time to run down the concourse.  As I arrived at the gate I warned the agent that there were several students in our group that were still behind me.  Cat's rather terse response was "well they have four minutes until I close the door."  Cat was well on her way to becoming my favorite person.  Four minutes came and went, and soon all the students were on board.  However the door remained open, and Cat continued to chat with the captain.  After a standard maddeningly long airport style delay the captain finally came on the intercom and told us that there was an indicator light on that was bad enough to keep us on the ground.  He had tried everything except on "last ditch effort" to clear the problem.  The captain continued to describe the vehicle that was going to carry us some 30,000 feet in the air over thousands of miles as "a machine somewhere between a video game and a personal computer"  So, what do you do when your PC is acting up?  Reboot.  Yes, the captain was going to reboot the airplane in hopes that the problem would magically go away.  The air went off, and the lights went out, and after a few minutes of darkness everything game back to life.  Unfortunately for us the indicator was still on.  So the captain announced we would have to get off the plane so that maintenance could come on board and try to fix the problem.   One of our students forgot his jacket on board the plane so after we were all off he went back aboard to retrieve the jacket.  As he was coming back on board the captain was heard to say "I don't know what the hell is wrong with this plane."

Meanwhile, Craig and I tried to explain to Cat, the friendly agent, that it was very important for us to get to Laguardia in fairly good time as we had to make a transfer to Newark to make our flight to Munich.  Her helpful response was "why didn't you just fly to Newark in the first place?"  In the end she did say that if the flight was cancelled she could rebook us on a flight through Chicago directly into Newark.  So, I collected bag tags from everyone in case they needed to retrieve our luggage and transfer it to the plane that would be right next door.  The board was showing a 7:30 departure time for our flight, but when 7:15 came around there was no sign of Cat or any update on status.  Finally she came out and announced that we all must board immediately.  Of course one of the students had just left to use the restroom and this caused poor Cat no end of frustration.  Why would they leave the gate area!? she inquired rather crossly.

In the end all were on board and the flight made it to Laguardia in plenty of time. All the luggage made it as well and so we collected the luggage and made our way to the ground transportation.  We boarded a bus that was supposed to take us directly to Penn station in Midtown where we were going to take a New Jersey rail train to the Newark airport.  However when we got to Grand Central we were told that we needed to transfer to one of the small vans. Unfortunately all 16 of our group would not fit in one van.  After some work a second van came and we got aboard, with a couple of students needing to sit on the floor!  Our driver insisted that we needed to be dropped off on the far side of penn station by the Amtrack lounge even though I repeatedly told him that we needed New Jersey rail.  Once again everything turned out fine and we made our way to Newark, found the group checkin desk and then dispersed for some much needed food. At this point it was about 2:30PM EST and we had not had anything to eat yet.

The group met back at the gate area for our flight to Munich where we had our first group discussion on the first reading assignment right there.  The students had all done their readings and so the discussion was good.  Boarding for our flight to Munich went smoothly until I discovered that I had a middle middle seat.  Bummer, except that there was an open aisle with an open window right across the way.  I moved into the seat, hoping that nobody would kick me out, and luck was with me.  After a glass of wine and a short movie I was actually able to get in a short nap.

On we go... landing, baggage claim, and our trek to the airport train station in Munich all went off without a hitch.  At this point it was 7:30AM Munich time, or just after midnight CST the group was starting to show some signs of getting tired. 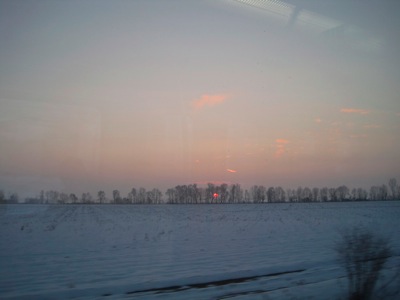 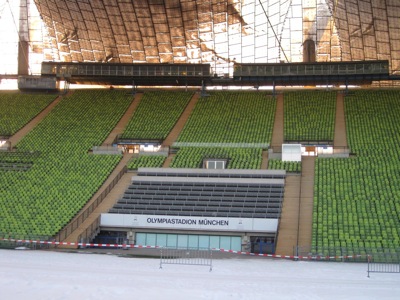 Our train ride was about 40 minutes to get to the Hackerbruke station and then it was about a 4 block walk to our Hostel where we were not able to check in yet, but could at least store our luggage before we went out for a long walk around the city.  Craig was an excellent tour guide for our walking tour around Karlsplatz and Marienplatz.  Lunch was a rather expensive stop at the Ratskeller.  I had Weinerschnitzl and fries for 22 euro.  After lunch we took the train to the Olympic Park, where we had a 2:00 tour scheduled, so at this point we are all coming up on the mark where we have been awake for 24 hours.  Our tour guide had us watch a short video on the Olympic park and that is when the head bobbing seriously started.  People were dropping like flies, myself included.  Even after the video as we were standing, yes standing, and looking at a model of the park I found that my chin was suddenly on my chest!  Once we got out and started walking around the park people began to catch a second wind, and the enthusiasm of Ruth, our guide, began to catch on.  Its amazing how much use the Munich Olympic park gets, it is really a model of how to sustainably host the olympics.  Nearly every building is in use today for something, including the famous stadium which up until this year was still used for Bayern Munich soccer club.  They have since moved to the new Allianz stadium, but the stadium continues to be used for concerts and other large events.  We were able to go right now on the field and enjoy the view of the stadium and imagine that we were walking where famous olympians and football stars had also walked.

After the tour was over, we went up to the top of the Olympic tower where we were treated to a fantastic view of the city, and the Alps in the distance.  With the tour over, people started to get tired again as we took the train back to our Hostel where we were able to check in to our rooms and then get ready to go to dinner.  We kept pushing to keep people awake until a reasonably late hour.  Craig, Aaron, and I went back to Marienplatz to the Andechs Am Dom a brewery where the beer is (or was) brewed by Monks.  I had a delicious dinner of roast pork and huge dumplings.  I'm pretty sure these are very similar the dumplings that I tried to make for Cenek, our Czech foreign exchange student a couple of years ago.  Its nice to finally see and taste how they are supposed to turn out.  Most of the group went to the Augustiner pub across the road from the hostel, so we stopped there on our way back to the Hostel to join them for another beer before turning in for the night.  This brings me up to date.  The trip is off to a good start but I need sleep badly. 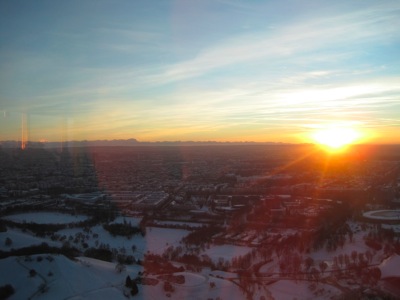 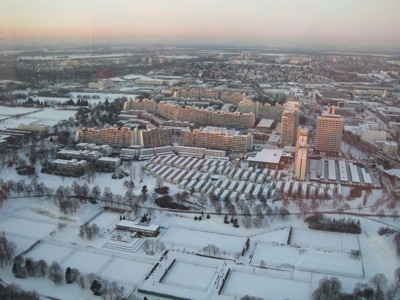