The first words I read as my phone synced up email in the passport control line at Luton were "still no tickets." The message went on to explain that the tickets were still supposed to be delivered by eleven PM by someone named Jamie who is running behind schedule. 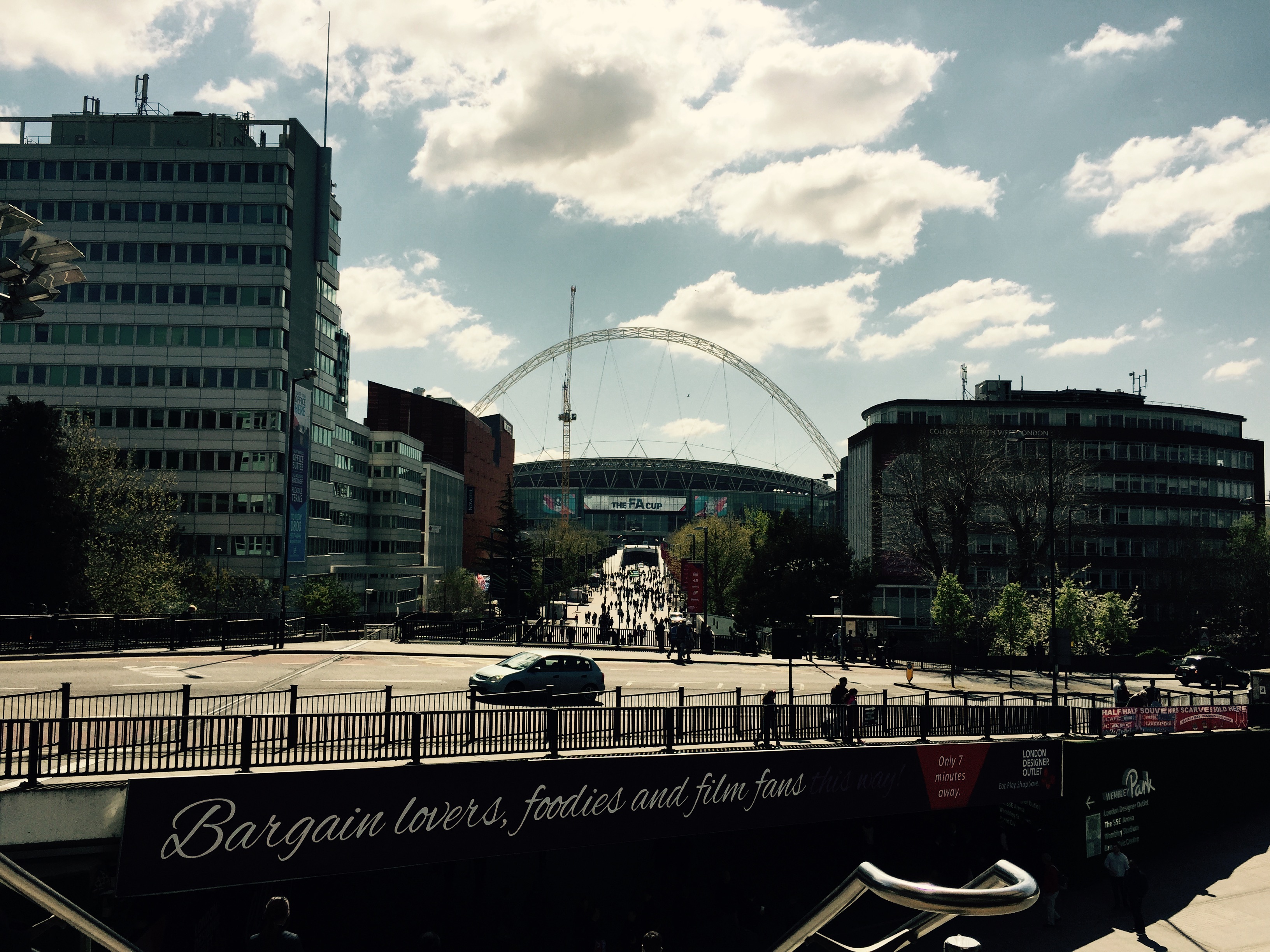 Getting tickets to the FA cup game is no easy trick. All of the tickets allocated to both clubs (Arsenal and Reading) were sold out to season ticket holders well in advance, so visitors like us are left trying to buy tickets online from third parties at crazy high prices. Yes, its crazy to pay over $300 to go to a soccer match. Yes, I paid it willingly! We did some research, so we think this is a reputable source of tickets but you have to put a certain amount of trust in strangers in order to get your tickets.

After the train ride into Farringdon station we walk over to the apartment we had rented through AirBnB, another exercise in trusting strangers, and are rewarded with exactly the fantastic two bedroom apartment we were promised. The owner met us at the door and showed us around. He had purchased us some breakfast items, and some fruit, and a nice bottle of wine. The apartment is on a Kings Mews street, which is nice and quiet so no problem with street noise either.

Jim and Josh arrived a few minutes later with Jim's luggage. We got a two bedroom so we could share with Jim and so he would not have to spend the entire long weekend in Josh's student housing. Which after seeing it, I am glad we did!

As 11:00 came and went, we still had no tickets. So we were preparing ourselves for the worst, which is really not too bad considering our apartment has a 56 inch big screen for the backup plan. We were all a bit nervous, but found some good entertainment value in the chat that Josh had been having with customer support at the ticket agency.

Cust Serv (23:37:07): I know - i have been told by Jamie that the tickets will arrive at your house by 11am in the morning as he have to do lots of deliveries and was promised by him they will be with you at 11 at latest

JMS (23:46:05): Thanks for your assistance on that. I know it's not your duty, and I am clearly angry, but I will not subject you to that anger.

Cust Serv (23:46:24): A refundable situation sir is where you did not get your goods as ordered and in time to watch the match

JMS (23:46:56): I know that that's a full refund, but I think the stress caused here warrants a special situation.

JMS (23:52:29): I don't think so. I'm sorry you've had to deal with me today (and plenty others like me I'm sure!) during this busy day. I know you're trying your best, but like I said earlier, my family flew in for this match and would ruin their holiday if this falls through.

Cust Serv (23:53:40): you are very polite and kind despite being angry and dissapointed but you never had it on me at any point of our conversation and I thank you for that

Cust Serv (23:54:49): I hope that the only chat you will have tomorrow is to say that you have got the tickets as ordered sir

Sweet dreams indeed! By 9:00 the next morning, we got the good news that we had tickets in hand. The problem was that they were not in the category we had paid for. They were not bad tickets! In fact they were really good. Row 8 on the first level, but they were in the corner so we would be looking at the field the long way. Since the website said tickets were fully refundable if you did not receive tickets in the category you paid for you were eligible for a full refund. So we got online and complained a bit. The first response was that we had been upgraded, and that these were actually better tickets than we had ordered for this game. LOL.

Shortly after this conversation we received a call saying that they had tickets for us in the area we had ordered. However these were way up in the nosebleed area, and we would be split two and two. about this same time we also noticed that two of our tickets had post-it notes attached with the note that they were Junior tickets. Hmmm, maybe we got the wrong tickets? Maybe they need to swap with us to get these to some guy and his two kids. Well, we reasoned, we don't have to meet this guy and get the other tickets, possession is 90% of the law. So we began to think about breakfast. But before we all met up for breakfast, we got an email from Karen, who had been woken up at 3AM back in the US by a call from Thomas, who wanted us to call him on his mobile.

It turned out that Thomas also had tickets, but said they were "VIP tickets." Karmic payback for being "one of the kindest people I spoke to in this chat support ever"? Maybe! Two of these new tickets included access to a table in the Bobby Moore hospitality area (free pre-game meal and drinks), and two of them were "merely" on the Wembly Gold (free budweiser at halftime) level. So, in less than 12 hours we had gone from zero tickets to tickets that were beyond anything we could have imagined. These tickets would be delivered to us by another delivery person, and then we were to meet Thomas near Wembly to return the four we originally had received. The new courier arrived at our apartment in a shiny white Range Rover, and delivered our packets of tickets. They all looked legit, and we all had great seats right on the halfway line! Now all we had to do was find Thomas and hand over the old tickets. Those young children might get to see the game with their dad yet.

As we made the walk from the Wembley tube station towards the stadium we had many opportunities to sell our four extras. We thought that we might even make a profit, but our honesty and the fact that we had VIP tickets in hand, put us in the mood to carry on to our meeting point and keep up our end of the bargain. It is interesting to think about the business model and operations of a third party ticket seller. They are selling the tickets to us at a significant markup, but the tickets have to come from somewhere. So they have to be able to forecast in advance how many tickets from each area they will probably have, and then they need to get those tickets from the original owners to the new buyers. Its no wonder a lot of the transactions come down to the wire.

Our tickets allowed us into the stadium well in advance of the game so we had plenty of time to soak up the atmosphere and check out all of our food, beverage and gift shop options. As we were standing in the gift shop I saw one young man in Reading blue from head to toe, with a big foam blue finger call out to his dad. His voice was shaking with excitement as his big blue finger pointed to a rack of merchandise. LIVERPOOL he said with longing. The dad just melted into the ground. I guess you can't control who your kids will choose for their football team, even in England.

As a fan of the Men in Blazers show, I was very excited to see that meat pies were available everywhere in the stadium. Tom's pies to be exact. So I enjoyed a very nice Guinness and roast beef pie as a pre-game meal. It is true, they are quite good. flakey crust, stringy tender roast beef and gravy on the inside, just like Sunday dinner back home. So, here is the obligatory food shot! You might also notice the betting sheet on the left side of the photo. You can bet on almost anything right there at the game. Final score, who will score, when will they score, who will score first, etc. It was too complicated for us so we left the betting up to others and saved our money for sausages and more food later. 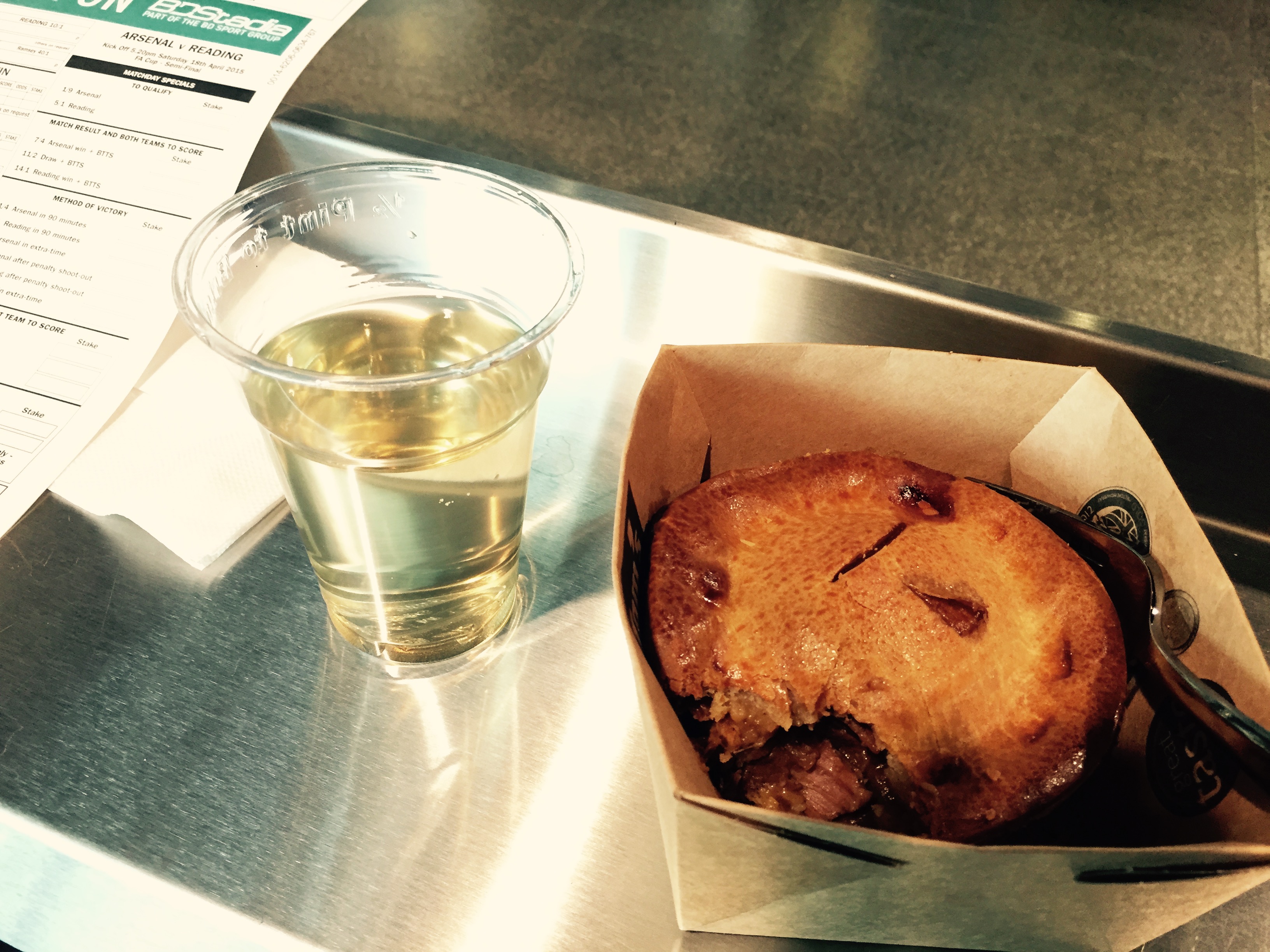 The game itself turned out to be good. It wasn't Arsenal's best performance of the year. But I blame that on Wenger for going away from the lineup that had us winning nine in a row. I would not have substituted Welbeck for Giroud, but I am not the manager. Nevertheless Alexis scored a great goal just before halftime and I was feeling good. A strong pep talk in the locker room and surely we would come out and seal the game with a couple more goals. It turned out that the opposite happened. Reading came out fired up and scored an equalizer, and we looked like we were playing "not to lose" which is our worst strategy. At the end of regulation it was Arsenal 1 - 1 Reading. OVERTIME! We were really getting our moneys worth out of these great seats. As long as we win in overtime and don't go to penalties life is good Which is what happened. shortly before the end of the first extra period Alexis scored again. It was kind of a sad screw up for the Reading keeper, but a victory is a victory! 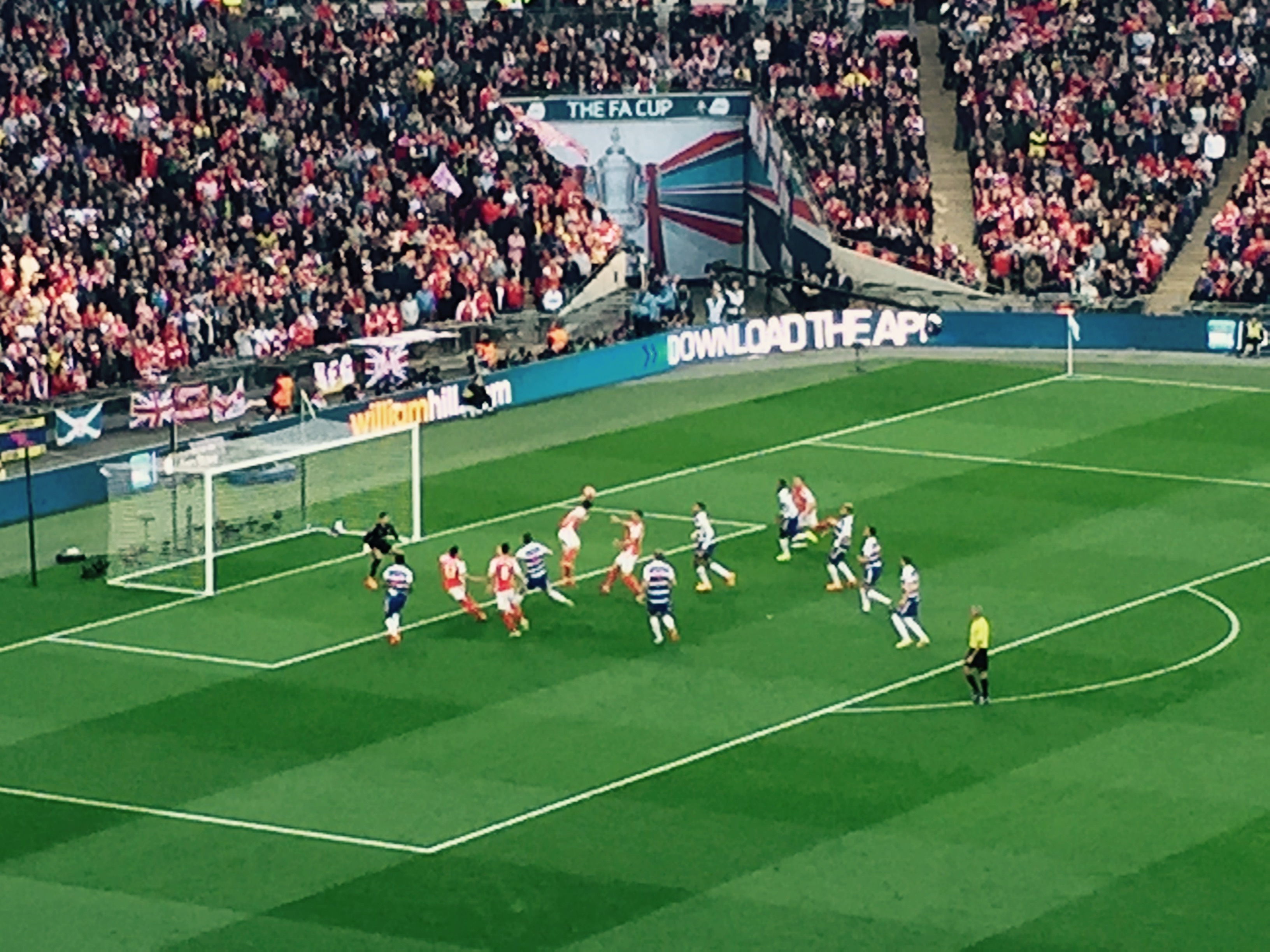 On to the FA Cup Final!