Its that depressing, cloudy, cool kind of weather here in Lausanne.  Low clouds and mist that block any hope you have of seeing across the lake, much less Mont Blanc.  The result is that the city does not seem warm or friendly.  When we walked by the lake area on our way to the tourist museum it was deserted and quiet.  Of course this is their off season but it was still strange, and it makes me wish I was home where even when things are cloudy and bleak you have the warmth of loved one's around you.

The visit to the Olympic museum was good.  They have some cool interactive exhibits where you can test your reflexes, train at altitude, and have a look at all of the new technologies that athletes and their coaches are using.  My favorite was the basketball tracker.  A camera on each corner of the court records the movements of players, a computer is then able to use that information to triangulate the exact position of each player on the court at all times.  Coaches are now using this to do a statistical analysis of how players are likely to respond to different offensive or defensive strategies.  Very cool.

When we finished our tour, the mist had lifted a bit so we could actually see the mountains peeking up over the low clouds.  I think that is Mont Blanc on the right of the picture below.  It may be a little hard to tell, but there is actually a layer of low clouds right at the top of the flag poles in the picture. After the museum tour, everyone was on their own for lunch.  Craig and I checked out the Manora, which is a nice, reasonably priced buffet near St. Francis.    After lunch I walked around a bit, and bought a new converter to replace the one I left in the outlet in Interlaken.  We had a hike planned to a tower on the highest point in town for 3:00 in the afternoon.

Unfortunately it was raining a bit at 3, and the clouds had returned but we decided to give it a try anyway.  After a very long walk up hill we found this spot. 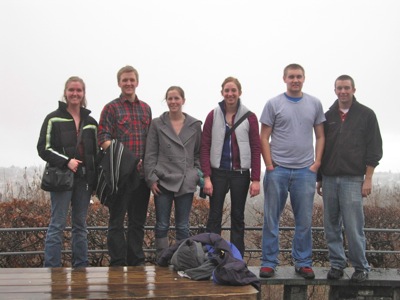 which wasn't a tower, but there was a flag pole we could climb.  As you can see there is not much scenery behind the students as we were up into the clouds. and it was hard to see the lake much less any of the mountains from where we were.  Nonetheless Craig was determined to find the tower that we set off for, and so while the rest of us were fooling around and looking at the small plastic bag with the odd botanical stencil on it he was trying to find the tower.  And, after another half mile of walking up hill here it was: 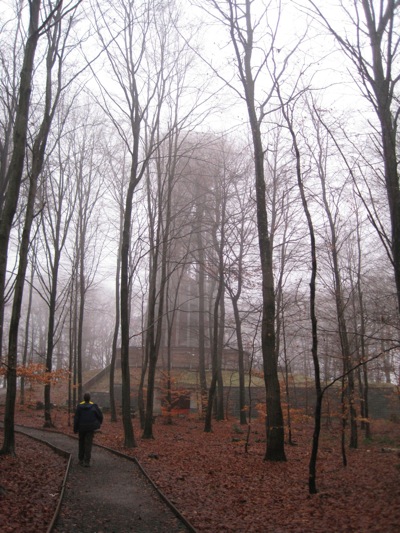 You could not even see the top of the tower when you were standing right in front of it.  However, we had come this far and were determined to reach the peak.  So we climbed the 151 stairs to the top of the tower.  And we were barely treated to a view of each other. 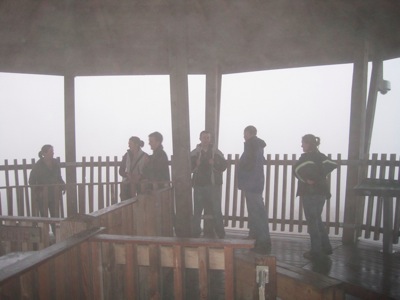 You can see we were definitely in the clouds!

The walk back to the hostel was all downhill and definitely an easier walk.  We found a nice french bistro to stop for a happy hour drink, and enjoyed the rest.  After we got back to the Hostel and caught up with the rest of the students, Craig and I found a very nice Asian restaurant (Asian Garden) for our supper.  Back to the room and to bed.

Its a great group of students and its fun to see them come together as they get to know each other better.  They rely less on us and more on each other with each passing day of the trip, and thats a good thing.