It was a beautiful two days in Buenos Aires.  Lets start with moving in to our room on the ship.  Other than the taxi driver overcharging us dumb Americans for the ride from the airport to the Puerta de Crucera everything about the checkin process went very well.  Our room is great, we have this curved wall of windows that makes you feel like you are just suspended out over the water.  Our sitting area is really a great place to just hang out and watch the sea go by.  The luggage all arrived intact, and we were even able to smuggle a few bottles of wine we picked up at the airport onto the ship.

We had two nice surprises on checkin:  First, our room is close enough to the Internet Cafe that we actually get a wireless signal in the room, and because we are in a suite we get 180 minutes of free wireless.  That may not last the whole trip but its a good start.  The second surprise was that we had a complimentary meal at the SS United States for our first night on the ship.  This is the only specialty restaurant on board, and it is definitely a good one.

It was hard to choose from the menu there were so many good options.  I had Diver Scallops wellington with truffle emulsion, Lobster Bisque, Surf & Turf (more lobster tail for the surf part) and of course chocolate souffle for desert.  Jane had similar except she had a pear and goat cheese tart instead of the diver scallops, and a salad instead of the bisque. We washed it all down with a nice bottle of Far Niente Chardonnay.

When we were leaving the restaurant the cruise director happened to be outside the door taping a segment for the next days onboard news and information channel.  We waited until we though it was safe for us to sneak by him inconspicuously, but that was not to be.  He spotted us and pulled us over for a quick on camera interview about our dining experience.  So, now we are famous for a few days.

Our second day in BA was even better than the first.  The main activity for the day was a delta river cruise.  Just north of Buenos Aires is a huge river delta, formed by the Plata river as it finishes its journey from the mountains of brazil and empties into the Atlantic Ocean.  We met our tour guides out front of the cruise terminal and they drove us through the city, pointing out interesting sites along the way.  Actually our driver and the owner of the company, Gaston, didn't say too much since he did not speak English, but our guide and interpreter did a great job.

We arrived at the Marina and got on board the boat.  It was a beautiful new 30 foot cabin cruiser, perfect for river cruising.  We took off up one of the main channels and just cruised along enjoying the sun and warm weather.  We laughed a bit at the fact that there are actually billboards along the side of the channel.  This gives you an idea of the amount of water traffic that uses this part of the river.  In fact the delta is home to a lot of people who commute by boat, and is the equivalent of going up to the lake for many other BA residents.  Everything in the delta uses water for transportation.  Everything from grocery delivery to garbage pickup is done by water. 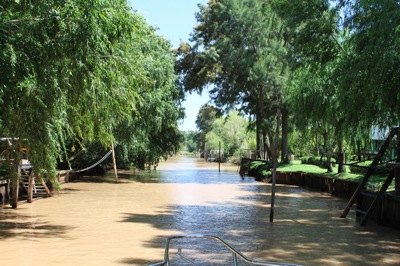 Need some groceries?  You just put a bag over the end of a pole on your dock and the grocery boat will stop for you.  On garbage day you just hang your bags of garbage out on the end of the dock and the garbage boat takes them away. 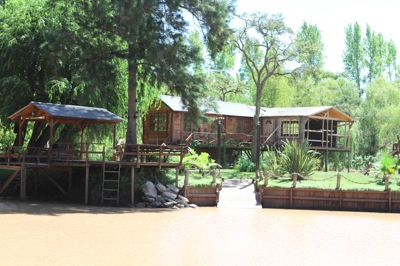 After cruising through some residential areas we anchored in a very peaceful side channel to have some lunch... A nice local cerveza and some meat and cheese.  It was good, and light, which was perfect since we were still plenty full from our meal the night before.  Note to mike and Sarah, We signed up for six sessions of boot camp while we are on board, and although the first session was during our tour, we did work out before hand!

After the tour we got dropped off in downtown Buenos Aires where we walked through the busy city streets, and looked at the shops and bought a souvenir for Josh.  Josh:  check out the Buenos Aires football clubs.

Of course we had the obligatory lifeboat drill, but then we enjoyed our sail away from Beuenos Aires in our room: 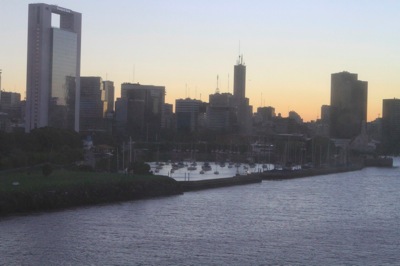 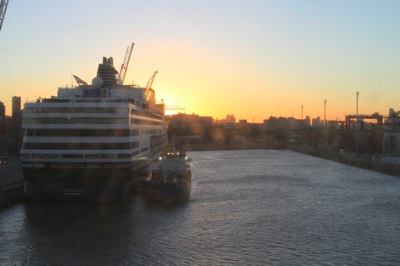 At dinner we went to our regular table in the main dining room, its located right next to the windows on the very back of the ship next to the captains table.  There was a little mixup at first with 10 of us thinking we belonged at this table for 8.  The waiter got that sorted out by moving this english couple to their proper table.  It seems that they were seated at our table the night before when 6 of us were eating at other places.  We really seem to have a nice table:  One couple from Houston TX, another from Ohio, she is the dean of a small college,  and another couple from New Jersey.  We had very good conversation, and it looks like it will be fun to get together and compare notes with them each night.