Hiding behind the ancient dirty exteriors of the buildings of the old city of Rome are beautiful palaces, with works of art as beautiful as those in the Vatican Museum. We Romans know how to live! So says Nino, our guide for our day at the Vatican. He is right too, when you walk around at night, and look into the windows of some of the places you see, you will notice that although the exteriors look pretty shabby, the interiors are very beautiful.

Having a guide is really the only way to go when visiting the vatican, otherwise you just wander around aimlessly looking at stuff without knowing the story behind all of the amazing things you see.

I've always been drawn to this photo on the ceiling of the first of the Raphael rooms, wondering what it was all about. The title really tells you all you need to know. The Triumph of Christianity. The fresco was commissioned by Pope Gregory XII in 1582.

Although it was a bit cloudy it was a nice and the clouds made an excellent backdrop to the statues in St. Peter's Square. 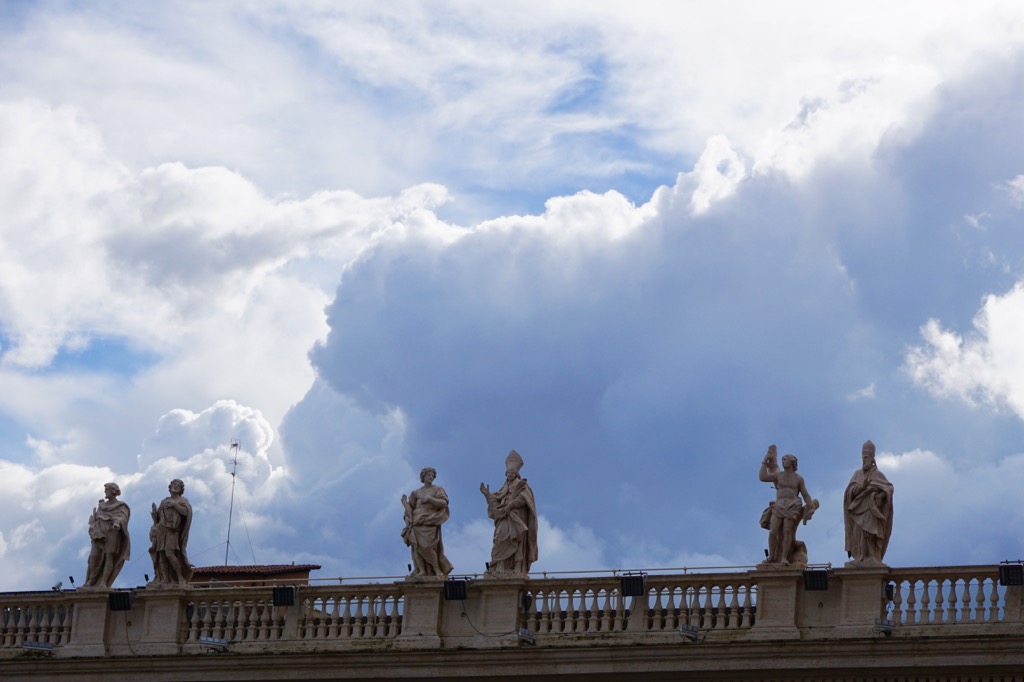 After the Vatican we turned the students loose for some time on their own. Jane and I went out in search of a restaurant. We, of course, had a couple in mind that Jane had researched prior to the trip. However that all went out the window when we were standing outside a pub only to see Özil score a goal for Arsenal against Tottenham. Now we were sucked in. Reviews aside, we were right across from the Vatican at what would surely be expensive, but there was football to watch. So into the Ris Cafe we went. Since many patrons were there getting lunch before the Italy Ireland Rugby match there were no tables available, so we agreed that as long as we could see the game sitting at the bar was fine. Soon a table opened up. But it had a horrible view of the game. So the manager asked the couple sitting at a different table to move to our table so we could have a better view. It was, but only marginally. We had just sat down and started to look at the menus when he came back and announced he had a better table for us in the other room. So we moved again. This time we had a great view of the game at a really nice table. Perfect. We were settled in and enjoying a pint of beer and the game. Ten minutes later the manager appeared again with a grin, and said "now you have to go back to the bar!" He started laughing, and we knew he was just having some fun with us. Sadly, the evil Tottenham Hotspurs outscored the Arsenal in the second half. Even more sadly, was that with four minutes left in the game, they changed the channel! The Ireland versus Italy rugby match was starting, and I believe we were the only people in the bar who cared one bit about Arsenal at that point!