Saturday, 12:30 p.m.: Our guide told us the best way of visiting the war museum here in Saigon is to start on the third floor and work your way down. As we rounded the staircase onto the second floor we were met with the title for the main gallery on that floor: "War Crimes of America" Wow! I wasn't expecting that. Suddenly I felt very uncomfortable. Throughout the museum we were confronted with images and stories of Agent Orange, senseless killings, Graphs depicting the numbers of bombs dropped on Vietnam in various years, and the use of Napalm. Clearly museums are not just dry exhibitions of facts, but can have their own point of view.

Sunday, 10:00 a.m.: Our first stop today is at a family run restaurant of the girl, Kim Phuc, she is widely known as "The girl in the picture" A pulitzer prize winning photo that many say galvanized the antiwar movement in the United States. It is a haunting photo, and the rest of her story is very moving. It is not easy to hear, it is even more difficult to imagine that our country would do that to a child. 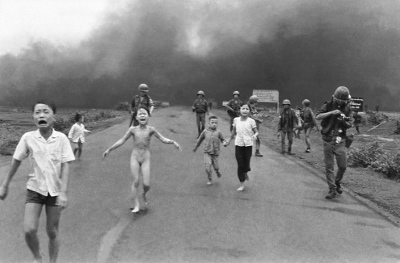 Sunday, 1:00 p.m.: Our final stop of the day is at the Cu Chi tunnels where we meet a Viet Cong veteran, and watch a 1967 documentary that extolls the virtues of the "war heroes" who killed many americans, and destroyed many American Tanks. We learn about the cleverness and the bravery of the Viet Cong who set booby traps to kill the Americans, and lived in the tunnels of Cu Chi for years.

Monday, 4 a.m.: I awoke with a start, my heart was pounding, and my thoughts were already on the day ahead. Today was a biking day in the Mekong Delta, but tonight was our "home stay" night. I was a little panicked. Our guide had informed us last night that there would be no hot water and no air conditioning at our home stay. The high today would be over 90 degrees, and the humidity about what you would expect in the Jungle. We saw a lot of houses that I would not want to stay in the previous day. I think to myself, "Is there any way to get out of this? Why would I want to do a home stay when I am in this really nice hotel?"

Tuesday, 1:30PM: Our guide invites me to turn around, so that he can drape a Python over my shoulders. I have a lifelong fear of snakes, and as you can see, this is a big one. However, since I teach a programming language by the same name, and I know that many of my first year students struggle with the language, it somehow seems appropriate for me to over come that fear, and so the snake goes around my shoulders. 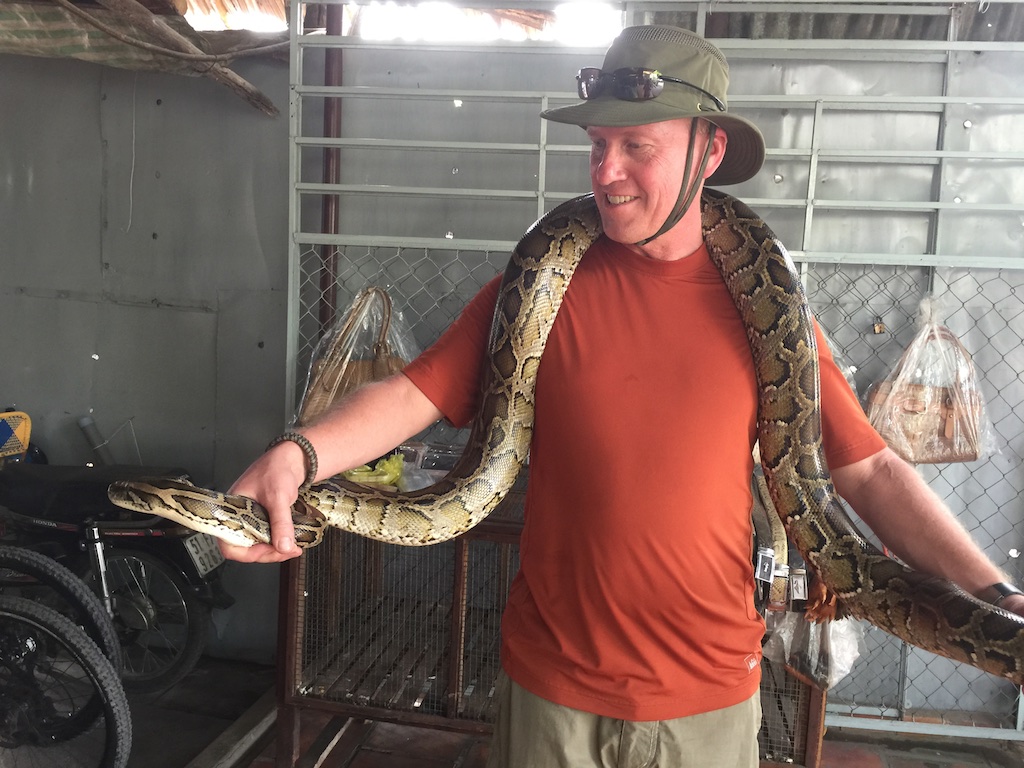 When my wife Jane and I told people we were going to Vietnam, we saw many different reactions: confused, worried, envious, and even peevishness. The mention of this country is capable of invoking a wide variety of emotions in people. I guess that is inevitable; there is the ghost of the war, and many have friends and family who died here. For some Vietnam is too far away, we are 13 hours ahead of Decorah and Luther College time. Politics: along with China and Cuba Vietnam is one of the few remaining communist countries. So why did we decide to go here?

Gereon Kopf recently posted about being uncomfortable. I agree with him that "stepping outside your comfort zone" is a good thing. It is a thing that we ask our students to do regularly, and so as a faculty member I think it is something we ought to ask of ourselves as well. One good way for me to do this is through traveling and experiencing new cultures and new points of view. Southeast Asia has long been on our travel bucket list, and since we will be directing the Malta program for Luther this Spring we decided that going to Malta the long way around, with a stop in Vietnam was a good way to extend our travels.

The vignettes at the start of this post illustrate several ways in which I have been pushed out of my comfort zone in only the first few days of our trip. Now the difficulty for me is that I am a problem solver by nature. Accusations of war crimes, pictures of young girls bombed with Napalm, comments from relatives that imply that our being here "on vacation" is somehow disrespectful to those who lost their lives in this country, and Pythons all cry out to be solved in some way. but there is nothing here I can solve, nothing really to fix. The things that are making me uncomfortable have largely happened in the past. There is nothing to do.

My own feelings about the war are not defined by personal experience. I was born after the US entered the conflict, and was only in kindergarten at the height of the bombing in 1969. I have no father or uncle or cousin who fought in the war. It wasn't a topic that was covered in U.S. History classes when I was in High School, until now, most of my knowledge of the war came from Hollywood.

This morning we had an interesting conversation with our guide. We asked her what they teach about the American war in school. She told us, "we teach that you are bad." She told us that she used to be a math teacher, from a communist family. But then she married a non-communist from the south. She was blacklisted, and so her prospects as a teacher were at an end. Her husband's father abandoned his family and fled the country right after the war, becoming one of the many "boat people." She told us that she knows that we are not bad people. She encouraged us to tell our friends to visit. This seems to be true of nearly everyone else we have had contact with. As a guide she has taken many American veterans back to their former battlefields, and she told us how they are all so grateful to see that Vietnam has healed and progressed as a country. It was a wonderful conversation. 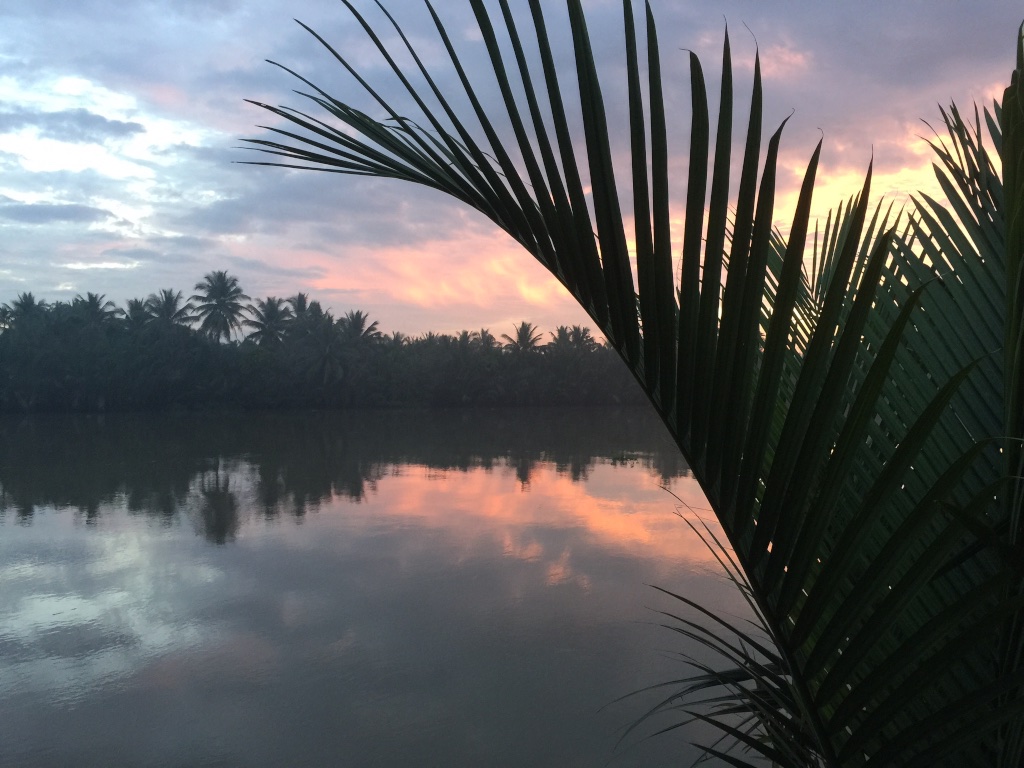 Tuesday, 6:30 AM: I am sitting under a thatched roof, at the edge of the river, enjoying the sunrise, listening to the Roosters crow, as they have done for the last two hours. Our home stay turned out to be a rather pleasant visit. I got to make fried Spring rolls in the kitchen with our hosts last night, and although the mattress was a bit hard and our room a bit stuffy we slept. The beautiful sunrise reminds me that everything is alright. More than alright, I am lucky to be here, lucky to have this experience that gives me a new perspective on our world. The challenge for me going forward, as it is for all Luther students, is how I will live out this new perspective in the days and years to come.