Today was another one of those days that was thought-provoking, uplifting, and inspiring. This morning we had a new guide, who took us to his own village and showed us his own house. That experience will be a part of a post that has been brewing for a week or so. I'm going to do this one first as it is fresh in my mind.

We just got back from JWOC (yes, they pronounce it jay walk) which stands for Journeys Within Our Community. What a great experience! We didn't really know a lot about what we were in for this afternoon, other than we were there to volunteer in a class, and it would involve speaking english. So far, so good.

Before I tell you about the class, and what we did, I want to give you a little background about JWOC and the educational system here in Cambodia. The latter is easy. Its pretty minimal. Students may go to school from ages six to fourteen. After that there is really not much for them. Students may go to a private school for further education, but they are pretty expensive for most people in Cambodia.

JWOC has programs in five key areas: Community Assistance, Clean Water, Microfinance, Free Classes, and Scholarships. The scholarship program is the heart of it all. Since 2005 JWOC has provided 120 scholarships for students to get a university education. However, these students must in turn give back by volunteering their time on another JWOC program. The instructor of the class we participated in this afternoon was one such student.

At the JWOC center in Siem Reap they have students from age 4 all the way to 60. The classes are open to anyone in the community and range from english, to sewing, to gardening, to computers. The class we worked with was a hospitality class. You can think of it as an enrichment course for students who are interested in improving their english so they can work in the hospitality industry. One student wanted to be a hotel receptionist, another told us he wanted to be guide.

We started out the class with everyone introducing themselves. There was much smiling and laughing and clapping as we went around the room. Their enthusiasm was infectious. After the intros we moved on to some role play 1. The instructor paired us up, and I played the role of a tourist who wanted to book a room, while my student played the role of someone at the front desk of hotel. I had a list of features that I wanted in my room and he had information about what they had available and the associated prices. He was into it! First he had to clarify several points with the instructor, and then we started out. After working our way through a fairly lengthy conversation, he said. "We need to do this again. We need to be the best so that we can perform for the class." So we did it again.

When the teacher asked for volunteers to do their role play for the class I think he might have been a little disappointed that there was no choice based on merit, but he was undaunted and quickly volunteered us for the job. Here we are in the front of the classroom playing our roles:

Jane also had an excellent student, that I wish I could have talked with some more. He wants to be an engineer, and is enthusiastically studying math and physics.

After the role playing was done we had about 20 minutes for free conversation. They divided the class in two, and put each of us with one group. The instructor said that since I was a professor they could ask me about anything. No pressure. We were all grinning from ear to ear even though they were a bit shy about asking questions. They wanted to know about where I was from, and what kind of crops we had, which led to a little discussion about how cold it is in Iowa. One of them was wearing a Chelsea shirt so that led to some quick conversation about football. Then I asked about what I should see or things I should eat. I think they were all impressed when I said we had already tried Amok and Lak Lok.

One student had been holding back and I could tell he wanted to ask me something, but he said he was to embarrassed. With a bit of coaxing he finally asked me: "what good are computers?" Well, now that is a question. Nobody laughed at him for asking it. What good is something that I take for granted and use all day everyday? So we talked about how you could use computers to learn things, anything you wanted to know you could find out. Only one of the students in my group had heard of Google! We talked a little about their markets and how they bought everything they wanted at the local market. I tried to describe how I used the computer to do my shopping. I can buy anything I want on the computer and a truck brings it to my house in two days. I may just as well have sprouted a second head.

Our hour was over in no time. But we left with such respect for these students. They were so enthusiastic and supportive of each other. It was a class like nothing I've experienced before.

Afterward we had a chance to talk with the education coordinator here in Siem Reap. She is an American from Connecticut who has been here about five months and had some nice insights to share with us. It is true that these students value education in a very different way because it is so special. She told us about the collaborative nature of the Cambodian culture and how important that is to their educational experience. Something that I never would have really understood before spending time here. But I'm glad that I did.

Here is the class with all of us all together. 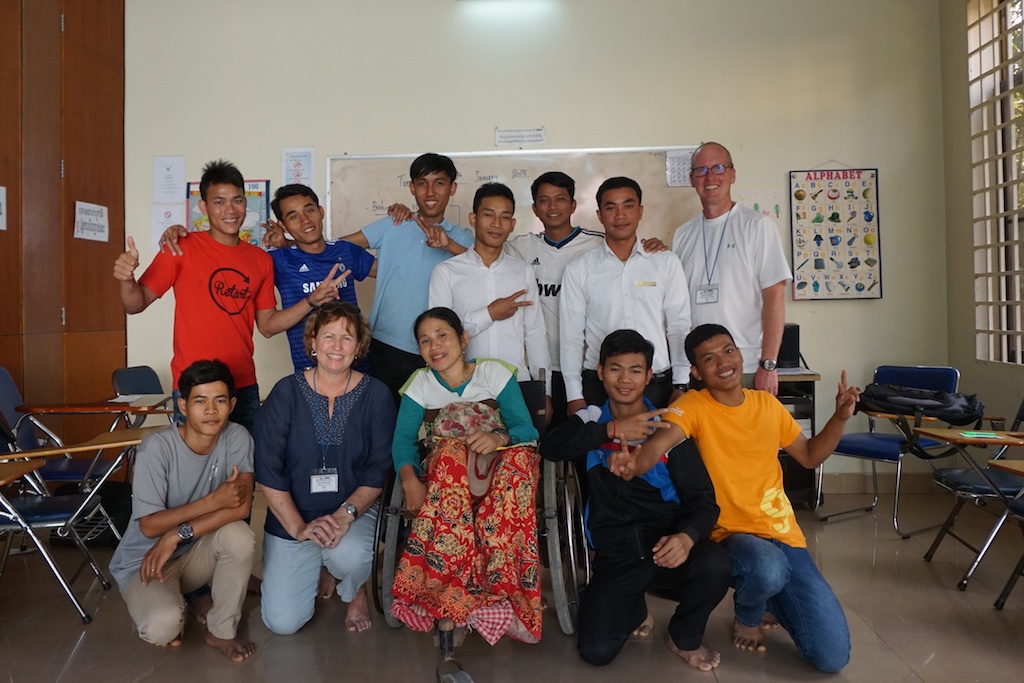 1.
^ Some great irony here as I've been known to skip out of faculty meetings where role playing is on the agenda.